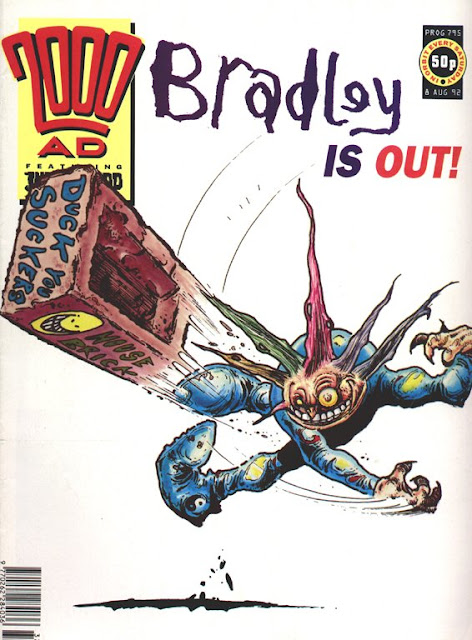 Other art credits:
Strontium Dog
A handful of one-offs

Notable characteristics:
Rounded knees. Skater outfits. Faces so stylized they almost don’t look like faces anymore. Tons of atmosphere. Can combine deadpan comedy, anger and hi-speed action. Not being Carlos Ezquerra.
On Simon:
I wasn’t actively reading 2000AD at the time Simon Harrison first appeared, just glancing over my brother’s shoulder, but I vividly remember encountering his work on Bradley and loving it. When I started reading each Prog for myself, I found out that he had at some point taken over from over from Carlos Ezquerra on Strontium Dog. This blew my tiny mind blown clean off.

It’s almost a cliché of late 80s/early 90s comics – editors were desperate to prove to their increasingly adult audiences that they weren’t making comics for children any more. And what easier way to do that than to take a childhood favourite character, strongly associated with a particular artist, and then give it to someone with an extremely different style?*

In a second cliché, why not also get said artist to design an all-new character for the series, one who is exactly tailored to suit the new art style (and wouldn’t work at all when drawn in the old style, as proved, sadly, by both Colin MacNeil and the mighty Carlos himself). Which led to Feral Jackson, one of my favourite ever characters and star of my official favourite ever 2000AD cover.** 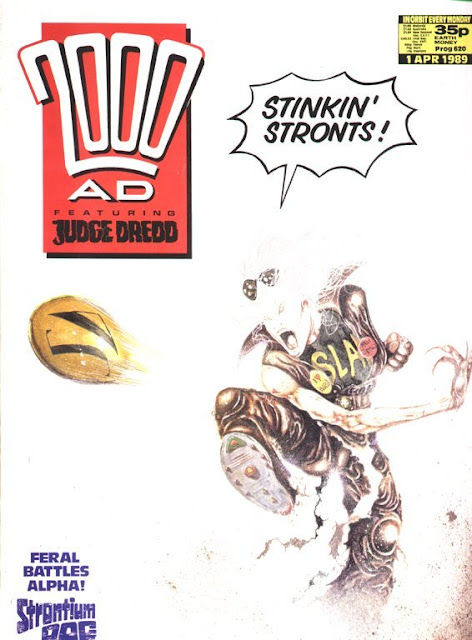 As well as having no nose and crazy claws, Harrison found a new way to draw with Feral, suggesting the idea that part of his mutation was being preternaturally fast.

Then there’s the costuming. Feral is part of a skateboard gang*** and as such has the early 90s baggy thing going on, presumably with chains in pockets and all that. Which brings me back to Bradley. What IS Bradley?

I think I assumed he was an alien for a long time, and that the whole series was set on an alien world, Ace Trucking style. Then I gathered it was a far-future setting, so maybe people have evolved to look quite different from today. Original story Alternators is based around a sci-fi toy, after all. Although it can’t be that far in the future, because we later learn that Bradley’s granpa is meant to have been a teenager in the 1990s, and clearly an earthbound teen at that. So Bradley is set, at most, in around 2050.

So basically it comes down to Harrison drawing people funny. Bradley (and pals Milton and Arabella) are the weirdest looking 6 year-olds. Or possibly 12 year olds by the time we get to the fairy-tale era? But if he hadn’t drawn them that way, the strip wouldn’t have half of its charm. But it speaks to the heart of Harrison’s approach to comics illustration – just go with your instincts. If he wants to draw people with round knees and leathery skin, more power to him. If all clothing hangs in folds everywhere, why not?

The tone and atmosphere oozes out of every panel, and it’s weirdly suited to the zany comedy of Bradley, the action thrills of Strontium Dog, and perhaps most potently of all, to the flat-out nightmare/dreamscapes of Revere.

I’ve sung my praises for Revere before, but I’ll be honest – it’s the art that really makes it. Smith has some interesting ideas going on, and does a neat line in coherent incoherence, but it’s Harrison’s tale really. I’m pretty sure the initial premise was his, too. Said premise being: a teenage boy-witch, whose powers including vomiting acid**** on people, lives in a future London where climate change has rendered everything into a barren dust-desert, and people live under the yoke of an authoritarian government.

All the stuff that’s well-articulated in episode 1, and then almost entirely ignored for the rest of the strip while Smith goes off on one. Anyway, about that art…

Spanning across 3 books, that at the time had interminable gaps in between, you can see Harrison developing his style, getting shinier and even more obsessed with page composition (not always to the benefit of storytelling, although in the world of John Smith at his John Smithiest, you can't entirely blame him).

His final efforts for the Prog had an ethereal quality, and just the most mesmerising textures. I’m not surprised he moved on into the fine art world.

Another legendary artist, like so many both before and since utterly unique in the medium. A painterly cartoonist, a violent action aficionado, with a great line in being both very grown up an charmingly juvenile. A shame in many ways that we never got to see his version of Dredd…

More on Simon Harrison:
There’s nothing obvious online that beats the interview that ran in Megazine 343, covering his more recent work as well as a bit about the early days.
There’s this one blogpost by Daryl Marsh analysing Harrison’s line work.

Come on internet, embrace the charms of Mr Harrison, eh?

Personal favourites:
Bradley: all of it until the music pastiche years, then the Sprog Prince
Strontium Dog: The No-Go Job; The Final Solution part 1
Revere

*As per the fascinating ECBT podcast interview with then-Tharg Richard Burton, it may not have happened the way I’m painting it here. But since Burton clearly can’t remember what the thought process was, I’m making up my own legend to print!

**As per the end-of-year Prog featurette from a few years back, anyway. It remains top 10 of all time for sure.

***what is it about the word ‘gang’ that isn’t wrong but instantly makes me sound like a super out of touch old person?

****The corrosive kind, not the head-trip kind. Although that’d be a neat witch-power too. Paging Brendan McCarthy…
Posted by alexf at 3:09 AM