First Prog: 555
Latest Prog: 1848 (on interior strip); before that, he provided two covers; his last appearance as anything like a regular artist was in Prog 698, and the cover of Prog 714.

Total appearances: 93
-including those credits from the Megazine which were almost all reprints of Heavy Metal Dredd from Rock Power magazine.

It’s also worth noting that Bisley’s total tally is substantially bolstered by his many and excellent covers, often on reprints. Barney remains a great venue to bask in the glory of little-seen reprint covers. 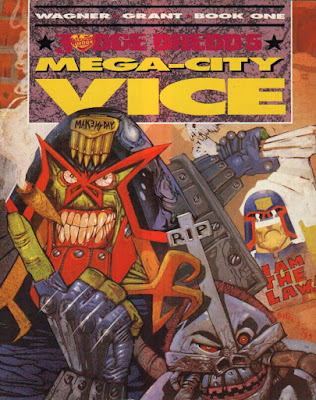 
Notable characteristics:
Errr, being perhaps the most mimicked artist to work on the Prog?
-He's not shy of talking about his own influences, but for whatever reason, in terms of comics, he himself is now that influence on those what came after.

And what exactly were people mimicking? Well, these kinds of things: mixing up hyper-refined paint with super-loose pencils. Chucking in jagged bubble writing here and there. Chucking in little background details, usually of a tomfool nature. Muscled men and sexy ladeez (OK, to be fair, almost all comics artists do that, or at least they did from c.1988-2010). Not being afraid of detailed but always correct-looking anatomy, in an expressionist vein.
More idiosyncratic Biz tropes include ENORMOUS guns, bikers, a certain ill-defined but recognisable rock-cool fashion. And also, alongside the muscled-men and curvy ladies, he did a fantastic trade in their opposite – ugly, stupid-looking folk.

On Simon:
You know, there are a LOT of mega-Bisley fans out there in comics fandom land. I like his work a lot myself, but in truth I only really know him as an artist who made a heck of an impact on 2000AD before buggering off elsewhere. What I'm doing here is apologising in advance to those megafans if I don't give the Biz the attention he clearly deserves...

As a young reader, I came across his work in the middle of the Horned God run, and I didn’t know enough then to understand that it was radical, game-changing stuff*. Not so much because of how it looked in itself, but more because it forever proved that weekly periodical comics could and should feature ‘fine art’ used for sequential storytelling purposes. Comics don’t have to be based around line art. I doubt Bisley was the first person to try this but by golly and by gum he made the idea mainstream.

But let’s turn back to his debut strip, the ABC Warriors. Less radical in form than the Horned God, but in many ways just as radical in tone and content. It’s relevant that writer Pat Mills seemed to have taken a leap in a new direction at this time. Alongside Nemesis: the Two Torquemadas and Third World War, ABC Warriors: Black Hole was kinda grown up. Compared to the much older ABC Warriors stuff, you really had to read the whole thing to make sense of it, and you had to allow certain themes to wash over you, not just have them spoonfed.

Bisley** added to this new tone enormously, but crucially, kept it fun. The first time I read the Black Hole story I didn’t really understand what was going on, but I enjoyed reading it anyway, and that’s mostly thanks to Bisley (and SMS).

Episode one, from an art point of view, was about badass-looking robots (and humans) on amazing-looking sci-fi bikes. As a piece of criticism, it’s a ridiculous thing to say, but Bisely somehow captured cool and splurged it onto practically every panel.

I mean, he’s even written the word 'cool' itself onto this star scan.

Joe Pineapples is a good example of what Bisley brought to the table. He had a bunch of previous artists’ work to draw on, but it seemed his technique was not so much to try to copy designs that had come before, but to take each warrior’s defining personality trait and work with that. So, Pineapples becomes a sort of late 80s version of what ‘cool’ looked like: leather jacket, sunglasses and such. Blackblood’s overlapping plates become even more serpentine than before. Hammerstein is the steroided action–movie hero with the squarest of jaws (and that cool thing were half his head wires are hanging out). Deadlock gets to be straight out of Warhammer - a fantasy character updated for a militaristic far future.

Part of what made it cool was the combination of extreme detail – which requires a lot of effort, alongside deliberate decisions not to bother drawing in the whole picture – which presumably requires less effort. I feel we’ll never know if this was a stylistic choice or just a mixture of laziness / running out of time. It matters not – the final result was, as I say, proper cool.

The Horned God isn’t the same kind of cool. I don’t know if painting is inherently uncool, but you can't hide the fact that this kind of art requires a lot of effort - and putting effort in isn't cool. Well, it obviously is, really, but you know what I mean. In any event, the effort that Bisley put into his painting here informs the tone of the comic – even on the pages where he pulls out the same ‘can’t quite be arsed to paint every last picture’ trick.

In keeping with previous Slaine artists, Bisley’s work was very fleshy and earthy. These characters live in some version of the world that is green and brown and thrillingly alive. But Bisley’s work, on this theme, was at a whole new level, mostly by virtue of being a) in full colour and b) painted. Something about the reality of paint as a gooey, sloppy substance just makes the blood and dirt seep into the story in a way that previous, very rare colour bits of Slaine hadn’t quite managed.

It was also the last time Bisley completed anything like a sustained run on a single comic strip, which is a shame but also the inevitable consequence of being massively popular and in demand!
On, then, to Judge Dredd, Bisley’s final thrill for the House of Tharg (barring that one Slaine retread in Book of Scars).

It starts with Dredd/Batman: Judgement on Gotham, and it’s hard to overstate how much of a big deal this comic was at the time. As may have been clear above, I wasn’t, back in 1991, a particularly big Simon Bisley fan. I had barely read the Horned God and hadn’t understood the Black Hole. I liked the art, even if I didn’t embrace it - but I knew he was cool. In a similar vein, I didn’t really embrace Judgement on Gotham as a story, but I knew it was cool, too. It’s Wagner and Grant’s jokes and situations that are the backbone of the comic, but it’s Bisley who sells it all.

He does it with muscles and babes and darkly evil villains and smoke-filled alleyways and roaring bikes and snarls galore. He even throws in a hint of romance. The whole thing is a little stupid, but also doesn’t care that it’s stupid. It picks you up and dumps you across the back of its bike and revs off whether you like it or not. It’s also filled with pages and panels that I could stare at and drink in for hours - something I don’t normally do with comics, being more of a story-driven reader.

I actually really like re-reading this story now, appreciating that Wagner and Grant, in large part, are serving up a vehicle for Bisley to do his thing, which sort of includes poking fun at the very idea of crossovers, and to a large extent at Batman’s world.

Heavy Metal Dredd, which followed soon after, was kind of the same thing only dialled way, WAY up on the ridiculometer. Usually funny, occasionally clever, and even more occasionally well-crafted, it was always a guaranteed shotgun blast to the cranium.

There’s something fascinating about the series that maybe deserves some proper critical thinking, of the kind I’m not inclined to give. Wagner and Grant, again on writing duties, again embrace the remit of giving Bisley space to have as much fun as he could, specifically drawing leather-clad rocker-types dishing out violence and then receiving worse violence from the meanest rocker of them all, Judge Dredd. 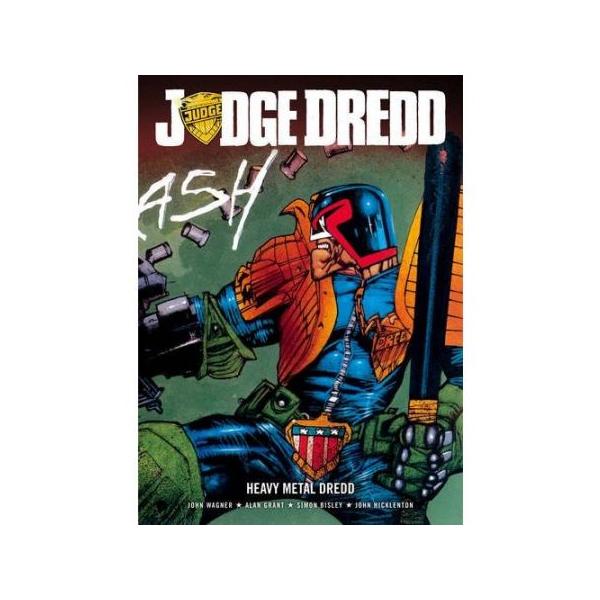 See also Bisley’s Prog covers, which can’t help but have the look of a metal/prog rock album (something Bisley indeed has a history in). It’s perhaps a little relevant that the comic gained glossy paper for the covers at this time, too, for extra shininess on the black leather. 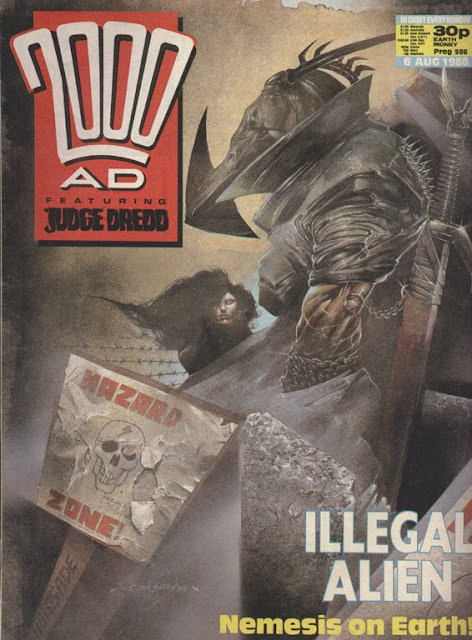 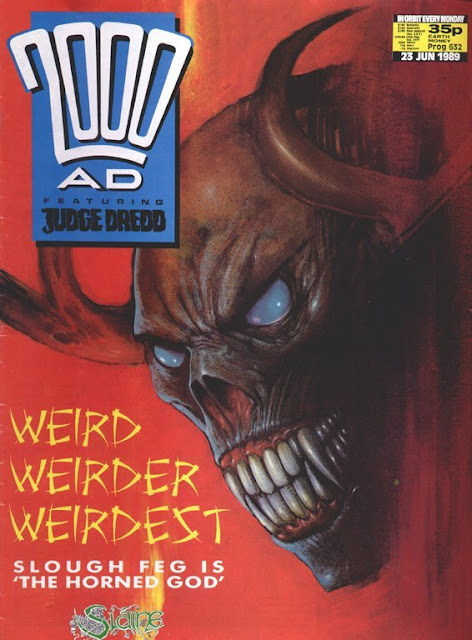 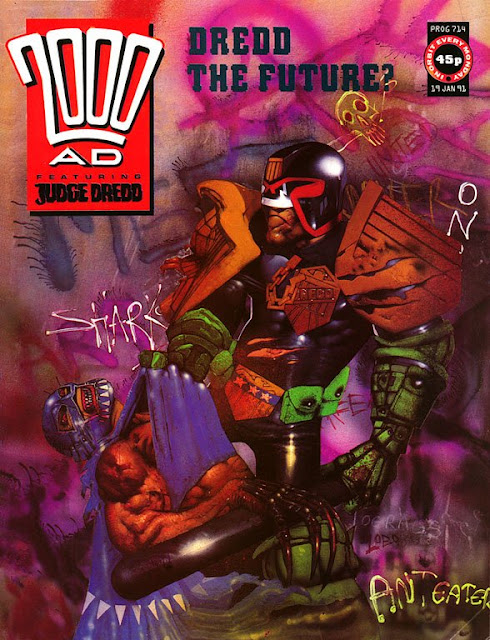 I can’t end without including this classic cover (very soon turned into a poster) that gave me the proper willies. 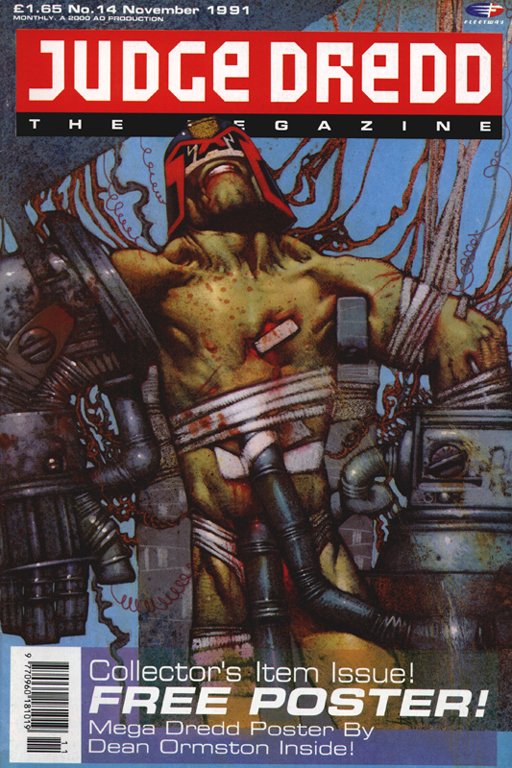 Technically it relates to Judge Dredd: Raptaur. But I don’t think I noticed that – there was an excess of grimy sci-fi body horror smacking me around the head. I tend to think of Bisley art as overwhelmingly fun – even silly, like a sixth-form Beano artist – but this one image is not that at all. I guess the lurid rust on the pipes (which are supposedly helping Dredd heal!), and the pre-gangrenous skin colour on Dredd is a little bit OTT in its nastiness. Weirdly, the whole thing is a callback to an older Bisley cover for Crisis, which in fact does show a torture situation: 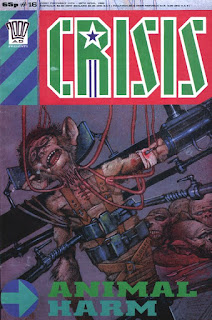 The point is, it still has the power to draw me in and repulse me. It might the single piece of 2000AD-related art that has most invaded my mind. Certainly I've felt the need to talk about it more than any other - even than plenty of pieces of art I like more.

More covers would follow, very occasionally in the years to come. One imagines he’ll do more of them in future, too.

More on Simon Bisley:
His website has a dedicated 2000AD tag
and a selection of links to various interviews
His most recent Prog cover was on Covers uncovered

*Frankly I hadn’t a clue what was going on, which is mostly to do with me not having read any post-Tomb of Terror Slaine at that point.

**And indeed his much-maligned co-artist SMS
Posted by alexf at 8:00 AM