Other art credits:
Judge Dredd
And, unusually, not a single Future Shock

Notable characteristics:
Shiny covers. Hard people. Real people. Gruff people. Unfussiness.
If I was being harsh, I might say that he his general sense of panel layout/design makes for some thrilling and arresting covers, but can feel a little static in panel-to-panel comics.

On Karl:
I first really took notice of Karl Richardson on the cover for Prog 1480, which sees Rafaella Blue bursting her way into a solo series, the 86ers. It achieves that dream of exciting action and fierce characterisation. I want to know what’s happening in the story, and I want to know more about her, specifically.

Sadly for me, the 86ers turned out to be fine, but not super exciting. And Mr Richardson only lasted as the series artist for two episodes. This is actually pretty common in 2000AD terms – get one artist with a strong design sensibility to flesh out a new world, then get another artist (often quicker and more of a storyteller, in this case PJ Holden) to deliver multiple episodes. Richardson did, very effectively, set up the basics of The 86ers - hardmen in space getting cross with each other, sometimes for virus-based / supernatural reasons.

The same trick was used on Grey Area, for which Richardson designed the cast and drew the first two stories, before handing over to a rotating team of other artists. For a while I wondered if Richardson was destined to be more of a covers man with the occasional strip, in the vein of Cliff Robinson or even Brain Bolland. He's got a real gift for cover design... 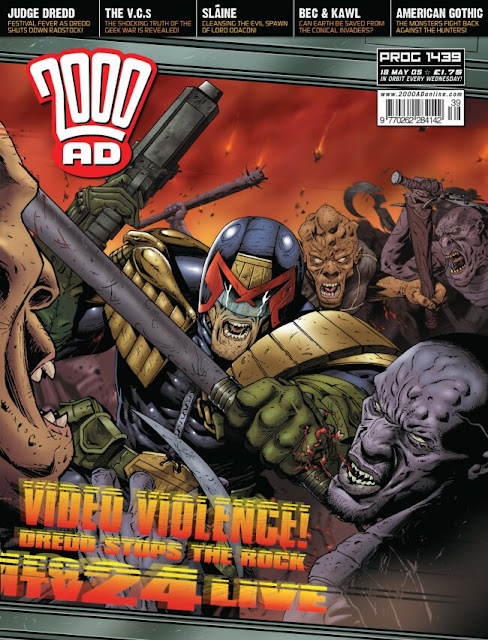 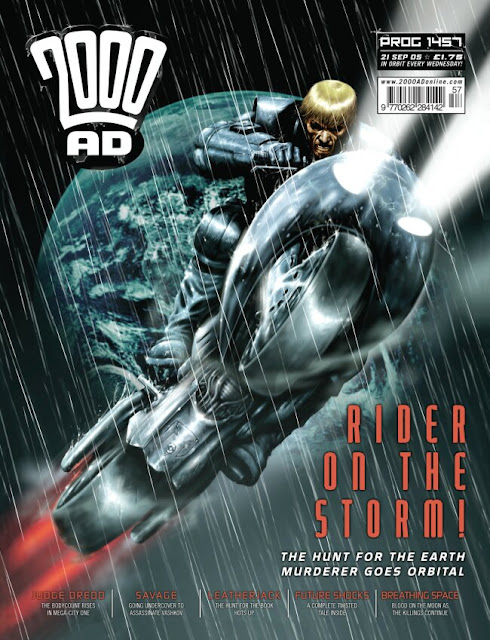 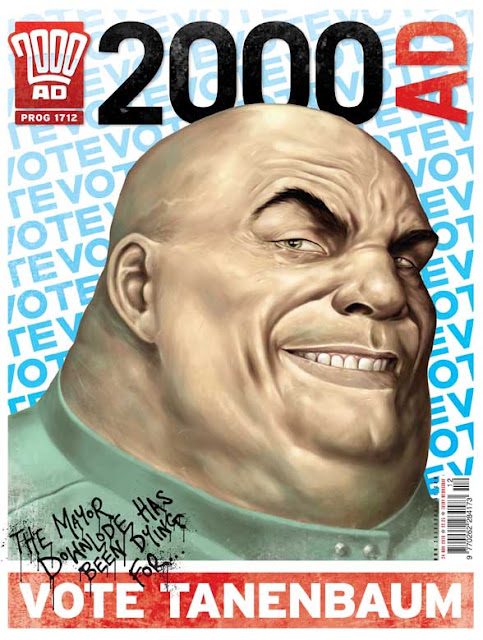 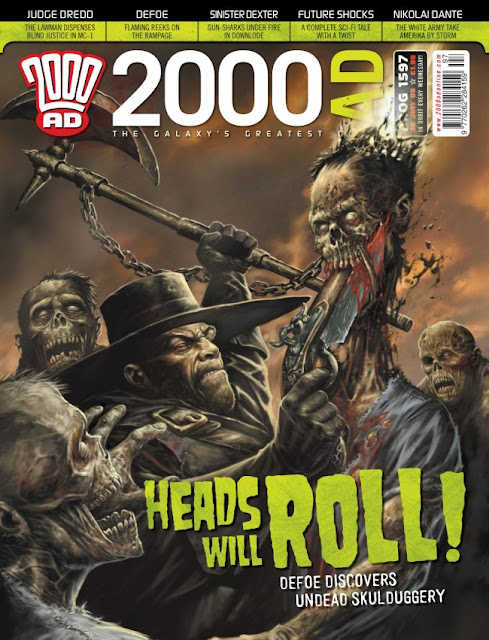 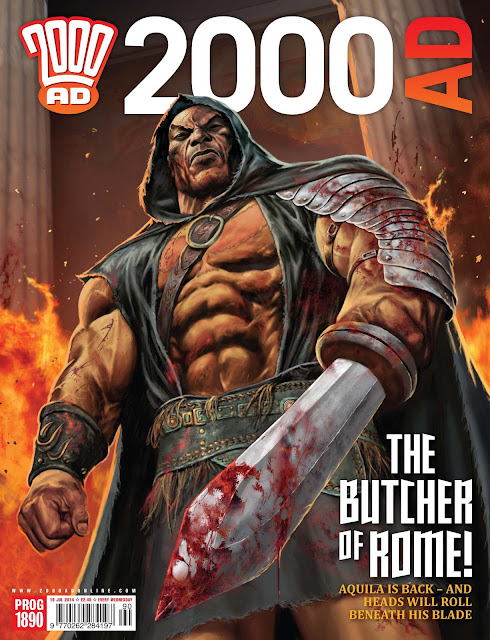 But he’s actually proven rather productive on the strip front of late, especially with 30 episodes of Outlier delivered in just over a year. And it’s good stuff!

Indeed, like those two aforementioned artists, he’s often saved his very best work for the big man himself, Judge Dredd. I feel like I’ve gone on about it on previous posts, or elsewhere in life, but one of my vary favourite Dredd stories from the last decade was Rehab, written by Al Ewing and drawn by Karl Richardson.

It delivered both Rage Hard and Dredd’s ‘nice’ counterpart, and it’s one of the few Judge Dredd tales that immediately grabbed me like the early, funny ones did back when I first read the Prog during the Wagner/Grant partnership.

I don’t know if it’s deliberate, but I find his version of Dredd's scowl and chin puts me in mind of John Hicklenton. And that’s a compliment. Richardson has an affinity for characters like Dredd – big, hard, gruff men with uniforms and high-tech equipment.


Back to Grey Area. It’s the right fit for Richardson, I think. His sense of realism, and love of hardmen, is ideal for the setting of near-future law enforcement types, who have to scowl while wearing body armour and carrying big guns. He also established the atmosphere of the strip. The Grey Area, and the ETC team who staff it, are somewhat underfunded and unloved by the government that presumably pays for it. Everything is a bit drab and run down; people work hard but don;t necessarily take pride in everything they do. It's classic blue-collar 2000AD.

Lately of course Richardson’s big project has been Outlier. It’s another of those strips that benefits a lot from being read in one sitting – the plot was rather dense and that can get lost on a week-by-week basis. Richardson had to sell the strip pretty hard with three key character designs: Carcer, the no-nonsense detective called in to investigate a string of murders; Caul, the timid ship’s technician who was kidnapped by the Hurde, and finally the hybrid Caul/Hurde creation that is the killer Carcer is hunting (revealed in the first episode, lest you think I’m spoiling anything!).

In fact, writer TC Eglington puts Richardson through his paces by demanding a new character each episode for series one, mainly put there to be murdered by Caul. It’s 50/50 for me whether the character designs come off. When they work, it can be both delightful and hilarious. When they don’t, it can be a little hard to remember who’s who. One thing that’s never less than clear is what each character is emoting. Outlier is all about people trying but failing to hide their motives and emotions, often defaulting to sarcasm.

But of course, 2000AD is a sci-fi action comic, and readers come for the glorious visuals depicting high octane and outlandish sci-fi ideas. And that’s where the Hurde come in, with their organic live-action 3-D printing technology. Or the humans answer to this, the armourigami droids. Richardson makes this plausible, without stopping to forget that what the readers also want is bloody, painful violence.

There’s a lot of plot in Outlier. But over three series, Richardson finds space to let the tone breathe when it needs to. There’s a stunning shot of a solar system exploding half-way through. 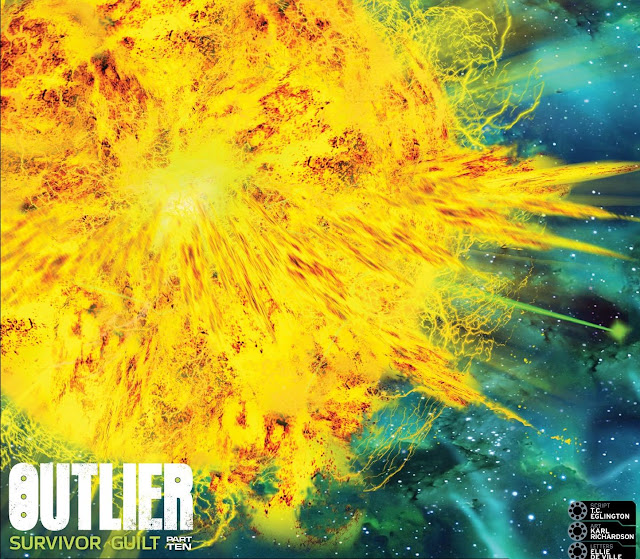 And of course the ending is one of the more memorable and bleak bits of 2000AD history. Sure, skulls and flowers are a cliché, but they’re so lovingly rendered that it feels earned here. Bye bye, human race!

With the right stories to play to his strengths (most especially in the world of Judge Dredd), Karl Richardson is one of Tharg’s more proficient droids of the day. Just lately, Richardson has been back in the Prog with a vengeance, dashing off one of the greatest giant robot/demon creations I've ever seen. Behold Mechastopheles, and despair!

More on Karl Richardson:
There's a fantastic blog about his fantasy work by Jonathan Green here
His most recent slot on Covers Uncovered

*In that he drew the first few episodes of the first series. Arguably, the world of Nu Earth was already well established by this point, and lead character Rafe, along with her ship, had already been introduced by Simon Coleby.
Posted by alexf at 8:07 AM