Notable characteristics:
Phase 1 Ronald is all about the hollow cheeks, washed out skin and haunted atmosphere. He’s got a very slight case of the John Ridgways, in that he likes to draw lots of incredibly thin lines to denote the fact that people’s skin and clothing is in fact covered in lots of little lines, which makes his characters often look a bit older, wearier and more vulnerable. I like it.

Phase 2 Ronald is all formal composition and colouring pizzazz. As with a number of digital colourists, I often find his work has most impact when viewed on a screen as opposed to in print, even though it’s usually bigger on the printed page. It’s that pesky CMYK/RGB rivalry at work, I suspect…

If there’s anything that exists in both phases, it’s that his characters tend to be lithe – more Clint Eastwood, less Arnold Schwarzenegger.

On Alex:
Alex Ronald’s is a career very much broken into two distinct parts, with two distinct voices at work. First, there was Alex Ronald, young hopeful strip artist working his way up through the 1990s ranks of Judge Dredd, Vector 13, Friday Rogue Trooper, and a handful of Sinister Dexter. You can see his work developing and improving on the page, and you can also see a very definitive style that is all Ronald and not at all anybody else.

Then, nothing for many years. At the time I wondered if Tharg had just gone off his work (exactly at the point when he’d become, frankly, much more confident) – but in reality it seems he just wanted to try other things. Which included, ultimately, switching to a very different style of art and indeed a different method, working with computers to create sleek, stylish and above all very modern-looking* covers.

We’ll get back to that later. First, let’s unleash some scans of Ronald’s super early work, no doubt to his embarrassment but actually it’s already pretty damn decent.

So that thing I said about Ronald’s style being his own and no-one else’s? I stand by it, but there’s no denying that his very first Dredd work is cast from the mould of Colin MacNeil. Now, bear in mind that poor teenage Ronald was jumping in at the deepest of ends, coming onto a Dredd Mega-epic mid flow, following on from no lesser lights than Carlos Ezquerra, who designed all the characters Ronald would be drawing, and then Colin MacNeil, as ever Tharg’s go-to man for ‘who can I draft in to help while Carlos is unavailable?’

So it’s entirely possible Ronald was actively asked to do his best Ezquerra/MacNeil impersonation. To his credit, it works very well, and, though I feel mean saying it, his work was a lot less jarring than Lee Sullivan’s, another newcomer thrust into the world of the Pit.

With each subsequent Dredd outing, Ronald tried out different looks for his Dredd, channelling the likes of Frank Quitely…

..before ending up with his own signature ‘haunted’ look (well, that’s how I read it anyway).

And he's another artist who blends horror and comedy in the way you need for mid-period Judge Death stories:

But for me he was on fire when tackling those occasional episodes of Dredd where the evils inherent in the system are exposed. Heartbreaking.

The same tone is exactly the right fit for a rare John Wagner misfire, that one story where he held forth his opinion on the OJ Simpson trial in a fashion that, as of 2019 understanding, isn't thinking even slightly of the long history of racial oppression in the US. Nonetheless, we get Dredd's seething but unspoken rage, and Ojay's impassive yet somehow smug face.

While he wasn’t in the Prog every week, Ronald was becoming a more and more regular contributor, alternating Dredds with Vector 13 (and the first appearance of a stock character for Ronald, with various interchangeable accessories)…

…and Sinister Dexter. That series in particular is a great one for letting artists really go to town pushing their own style, and seeing what it does to our two protagonists. I find Ronald’s Sinister to be a vision of moral decay, while his Dexter is especially troubled by the morality (or otherwise) of his profession.

Ronald then inherited the somewhat poisoned chalice of Rogue Trooper. Wrestled into something resembling modernity by artists Henry Flint and Steve Tappin, the actual story was stuck in limbo. Steve White had brought back the Biochips, and even re-introduced the original Rogue Trooper alongside his own now personality-less and regened biochips (to little effect), and old favourite Venus Bluegenes (to better effect). But there still wasn’t quite a narrative to hang it all on.

You’ll be forgiven for not remembering, but eventually the team (now including co-scripter Dan Abnett) tried its very best to give Rogue a clear mission, in this case fighting religious zealots. A minor subplot had introduced Karvanu, a sort of deity that was gaining favour with the regular citizens of Nu Earth (or actual Earth whatever planet this was all happening on). White even conjured up a certain Reverend Carwardine, who was to be the new ‘Traitor General’ of the series.

Of course, no sooner do we get this new villain and new mission than Rogue is killed, while Friday and Venus are kidnapped and sent to a Skumak Big Farm, which may or may not have a link to Karvanu. And it’s at this point that Alex Ronald steps in, roughly alternating episodes with Greg Staples. Frankly the pair of them make Rogue Trooper look more dramatic than it has done in years, matching the melodrama of the story.

And there’s a neat chapter where Rogue mind-melds with a child who has been brainwashed by the Reverend. It can’t be the first time this visual trick has been used to represent telepathy, but I can’t recall another example, and it’s damn effective.

It fell to Ronald to draw that fateful final episode, in which readers, unknowingly at the time, said farewell to Venus Bluegenes and poor old Fr1day…

Which leaves us with Ronald’s most high-profile tenure, the 2000AD years of Missionary Man.

I’ll be honest, Missionary Man is another strip that I kind of got lost with, narrative-wise. Early episodes were mostly about a hard man being hard with guns and pseudo Bible quotes in small towns. Then at some point he started on an anti-corruption kick in slightly bigger towns; by the time Ronald is on art duties, Preacher Cain’s backstory as a Texas City Judge has been revealed, and he’s being hunted town by Corrupt TC Judges on the one hand, and voodoo-inspired witches on the other. While also attempting to take on the Moses role of leading a band of mostly god-fearing Cursed Earth folks into some sort of Promised Land, free from Judges and Voodoo.

Have I got that right?

No matter, this blogpost is all about the art, and the main thing to note is that Cain is not in a good place physically or mentally, he’s kind of in bayou country, and Ronald draws the heck out of suffering Cain, sinister witches and freaky monsters.

You can also see his confidence building as a storyteller.

Although I would say that it’s not the most coherent story he’s being asked to tell, with scribe Gordon Rennie climbing up a steep hill to finish off his first epic.** Anyway, with Preacher Cain’s mission in the Prog complete, Ronald disappeared, perhaps into a Promised Land of his own (I think involving some computer games work, and definitely ending up with steady involvement in Dundee University’s ‘Comics Masters' course).

And then, seemingly out of the blue, he reappeared in the Meg and Prog as a digital cover artist extraordinaire.

He's done plenty of Dredd - to my mind, going back to his roots with a Colin MacNeil-type Dredd, although the 3D effect puts me in mind of Aardman. Now there's an outfit who could be the ones to strike it big with a Dredd movie! And speaking of movies, it's a brave artist who can movif-y Sinister Dexter, a strip still most known as being 'that one that ripped off the two best characters from Pulp Fiction'.*** Ronald somehow makes you believe you could cast a SinDex movie without having to go anywhere near Messers Jackson and Travolta.

But most delightfully, Ronald's covers run the gamut of 2000AD, and if you ask me it elevates the material. I'm a fan of Ulysses Sweet, but I'll admit that the actual series never conveyed the menace of this cover:

and I'm very much a not-fan of Project: Greysuit (I guess most of book 1 was pretty great, but it was a steep, steep drop from there), but again, here's Ronald classing up the final series:


Perhaps the ultimate affirmation of any cover artist is a commission to do a '2000AD itself' cover - one of those ones showing Tharg (and maybe a minion or two) at work... 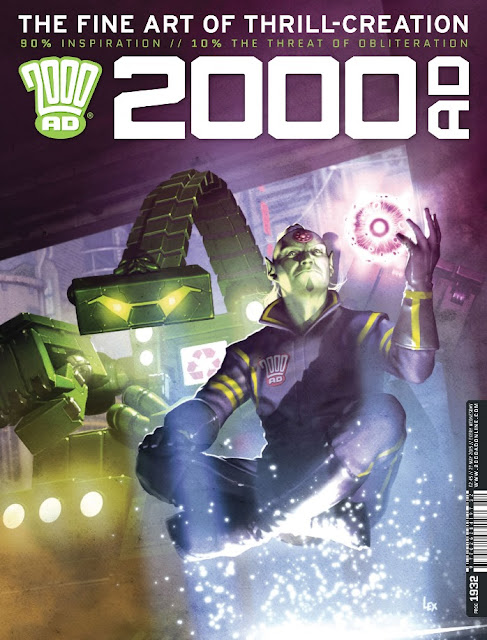 I'm guessing we won't see interior strip work from Ronald anytime soon, but I always enjoy his regular appearance on the front page.

More on Alex Ronald:
He has a Facebook presence
And, befitting a covers artist, several appearances on Covers uncovered
I especially recommend this one, which isn't technically a 2000AD cover, but which does his digital process:

*I’m old enough (at 41) to consider any art that clearly looks like it was created on a computer to be ‘modern’.

**And on the verge of delivering a string of all-time classic thrills including Necronauts and Caballistics, Inc. Why not read more about Mr Rennie here…

***And for a good couple of years, that series was served by cover artists doing various movie poster pastiches, to rather good effect.
Posted by alexf at 11:44 AM