Total appearances: 92
-including the episodes of Metro Dredd that were reprinted in the Megazine, but not the ones that weren’t.

Creator Credits:
Snow/Tiger
Thirteen, or, if you will, Th1rt3en

Notable characteristics:
Well look, you just can’t not see the sheer amount of lines, often incredibly thin, that in particular he uses to mark skin but also clothing texture. It’s astonishing. I don’t know about you, but I remember being about 12 and realising in art lessons that when drawing a person, they don’t come with outlines. In fact, if you’re looking for lines, even children have wrinkles all over their skin. But when you put them down on paper, it just makes it look as if every time you draw a person they’re 100 years old.

Well, Andy Clarke managed to solve that problem – his skins are wrinkled, but not with age, just with texture. Amazing.

Unrelated, he’s also a master at panels that come across like freeze frames in a film – especially moments of extreme violence.

On Andy:
Another flame that burned brightly for a time, only to disappear from the Prog after more lucrative offers appeared. And good for him! If you ever want an example of a comics creator who honed their craft in 2000AD before getting jobs on Batman, Andy Clarke is perhaps the prime example.

His earliest 2000AD work was good, surely, but not quite great. Four years of steady work later, and he’d become properly excellent, able to work with pre-existing characters in his own style, but also a reliable co-creator of all new ideas.

His early training came not on Dredd, but on two then-new characters who followed the Dredd model of having a bunch of shorter series with rotating artists*, Sinister Dexter and Nikolai Dante.

In fact, Clarke even got to join the two together, briefly, for a somewhat indulgent bit of cross-Prog shenanigans.

He had the chance to expand a little on the first full series of Rose O’Rion. His style seemed to have settled into itself. A little plastic in texture, perhaps, and some of the expressions were slightly more cartoony than his anatomically accurate poses.

He took it up a gear surprisingly swiftly on one of my favourite early SinDex outings, a sort of origin tale for the duo, Bullfighting Days. You can see the lines. It immediately sheds the plastic texture on everything, and gives it some real verve. Plus, the layouts within and across the page start to zing a bit more

With a leap in style and quality achieved, Clarke moved into the big time with the challenge of building a whole cast of characters, and a very particular setting, for Thir13en. If I’m honest, the costume design for Joe Bulmer, the lead character, is a little off-putting, but I can’t deny that it fits, and that it helps flesh him out beyond the dialogue. But it was Clarke's startling vision of a sort of skin-flesh half creature that really made me sit up an pay attention...

Bulmer's ally Daksha is a superb piece of design, and then there’s the sort-of villain, Durant, Clarke’s most line-encrusted character yet, who is all kinds of awesome.

It’s also the point where Clarke’s natural affinity for action jumps into cinematic mode, with some proper freeze-frame stuff.

I wonder if it’s this quality that lead to Andy Diggle working with him on Snow/Tiger, which smacks of a comic that was hoping to get picked up as a TV series, coming as it did when 24 and Spooks were still new, shiny and generally thrilling. Storytelling skills fly off the page, and the emoting has improved, too, along the lines of a Steve Dillon (no higher praise in my book).

Back in the world of Sinister Dexter, Clarke introduced a couple of major supprting characters, Carrie Hosanna – aka Mrs Sinister,

and Vijay, aka Kal Cutter, who has the delightful body modification of being able to turn his hand into a gun. It makes no sense but looks cool as funt.

For his final bow, Clarke delivered a compact but stellar turn on Shimura, continuing a trend of making the series more enjoyable through stellar action art, very much in a 1990s straight-to-video mould, complete with gratuitous nudity and ultraviolence. Lovely stuff.

More on Andy Clarke:
He has a dedicated Tumblr, showing further development and stylistic awesomeness
And a page on Comic Art fans if you want to buy some original art
-can't seem to find any interviews, sadly. 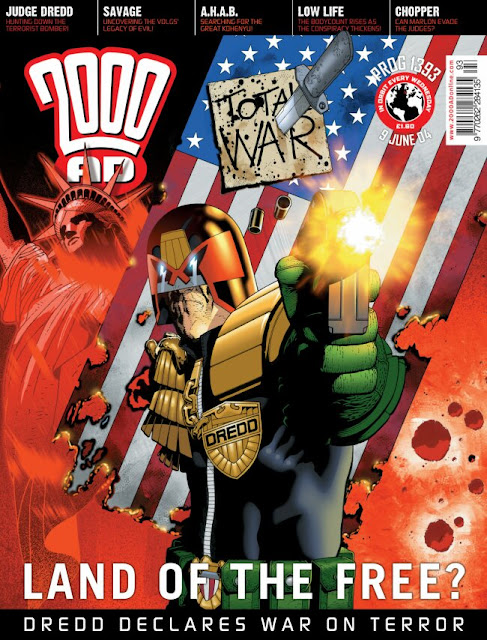 *Something I’m especially grateful to David Bishop for instituting, I feel it did no end of good and am kind of sad doesn’t happen more often. Auteur theory be damned!
Posted by alexf at 12:26 AM 3 comments: