- including his 20-issue run on ‘Angry Planet’ from Tornado, one of the last great un-reprinted epics of yesteryear (I’ve only read about 3 episodes of it. They seemed pretty fun.)

On Massimo:
Belardinelli was one of 2000 AD’s original mainstays. For any given Prog from the very first up until the 600s, you’d be more than likely to find his pencils and inks gracing the pages of 2000 AD – the man built up an enormous body of work over a too-short 14 year span in mainstream UK comics. He was another artist in the Ezquerra mould who could churn out page after page of excellent material, and never miss a Prog, even for 50-part epics like Inferno or Meltdown Man. And with the level of detail he crammed in to his panels, that’s no mean feat.

The received wisdom is that Belardinelli was amazing at drawing spaceships, alien beings and weird worlds – but he couldn’t draw people. I’ll agree there is something about the way he drew people that sticks out – but it’s clearly not that he ‘can’t draw them’. Even alien-fest Ace Trucking Co was full of humans and humanoids (including the three leads, who might have odd faces but have pretty human bodies, don’t forget). And his run on Slaine was full of gorgeous human depiction.

I guess you could argue that his heroes / normal people tended to have rather bland faces (nothing that can’t be solved with an eye-patch and a beard),

and there’s something about the way he draws the body in motion that doesn’t quite seem right – and yet, it often feels right. The impossible back-handed sword swipes of Evil Blood; Macha’s fatal bull-run in Slaine, or Slaine’s own ‘salmon leap’; even the incredibly irritating rhyming-couplet backflipping double-creature Bloo-Baloo (from Mean Team book 2, may I remind you);

It may be wrong on a technical level, but it sure gets across what’s happening. I think in the world of fine art this would count as expressionism*. Whatever the terminology, it lingers in my head every bit as much as the delights of his character and spacecraft design.

One of the first stories I ever read in the Prog was the second episode of the Mean Team. Belardinelli’s art is a huge part of why I loved that story, and in turn, the comic itself. The wicked sneer of Bad Jack, the terrified yet kindly face of (still human then) Henry Moon, the comic furriness of Amok, the friendly yet sinister design of Steelgrip the robot, the obvious smarminess of Richman Von…**

What I’m saying is, Belardinelli can invoke stuff real good. Later on, he did a heck of a job working up the characters and setting of Moon Runners, the epic that wasn’t. One wonders if the writers ended up being overwhelmed by the fun Belardinelli was having to the extent that they forgot to fabricate an actual story to tell.


As a go-to artist, Belardinelli holds some kind of record for his Prog count when it comes to Future Shocks, Time Twisters, and general one-off tales (33 individual stories, plus a five-part Tharg story)***. I guess the reality is that, at various times, he didn’t have a big long series to do, but he was too good an artist not to give regular work to. And he always elevated the scripts he was given, designing characters and grounding them in a real place, even if only for a two-page tale.

His one episode of Judge Dredd is notorious for including a drawing of the man’s actual face, deemed so off-model by Tharg that it was censored, and he never drew the strip again (although he’s drawn Dredd plenty of times, and perfectly well, if you look at his montage covers and star scans). That one mis-step aside, it seems there was almost nothing the man couldn’t tackle. Inferno mixes futurecycle/sports action with gruesome death, especially by fire. Blackhawk transitioned from Gladiatorial arenas to alien worlds. Meltdown Man required the invention of a new Earth with a whole range of habitats and fun with humanoid animals. Ace Trucking Co, at times, felt like Wagner and grant were trying to outdo each other thinking of insane things for Massimo to draw, such as the planet entirely covered in wriggling worms.

No sensible discussion of Massimo Belardinelli can end without talking about The Dead. It’s a bizarre and divisive story that is amazingly pretentious, but also incredibly funny, and desperately weird. It’s Peter Milligan all over (and we’ll get to that mad genius soon enough). But it’s also quintessential Belardinelli. I don’t know what panel descriptions Milligan provided, but the design of Fludd and his cohorts is a staggering work of heartbreaking genius, as the saying goes.

May he rest in peace, and rise in glory.

Personal favourites:
Dan Dare
Meltdown Man
Ace Garp – honestly based on the art alone it’s hard to pick a favourite. Too many Bams, perhaps, with its mini-Massimo and his whirling companions? I love The Croakside Trip, too. The fanboy in me has a tremendous soft spot for that one episode where Tharg pulls Ace out of a drawer full of forgotten 2000AD characters.
Mr. Macabre, a neat-little one-off that has stuck in my mind more than many others.
Slaine: Bride of Crom; Dragonheist
The Mean Team: book 1
Still Life, a blinder of a Future Shock about creation and art that works because the script is great, but sings because of Belardinelli.

Not to mention many a blinding cover: 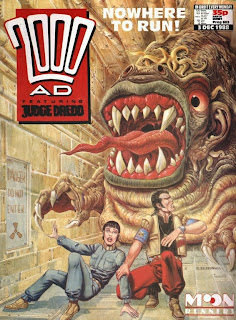 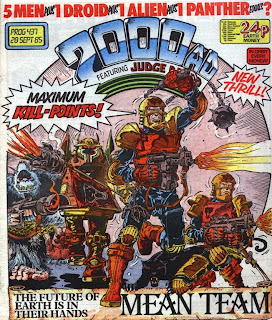 And a series of delightful Star Scans, too: 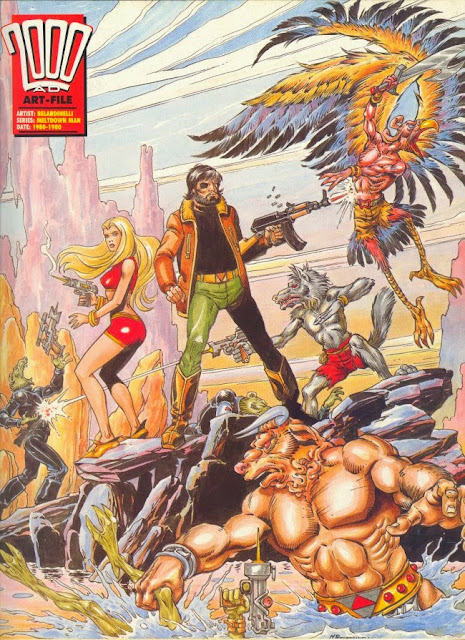 More on Massimo Belardinelli
Here's an old interview
And there's a Facebook tribute page, too.

*The key example of expressionism that I was taught at school was van Gogh’s wicker chair. Its proportions are all wrong, but it really gets across the chairiness of the chair.

**Huge props of course to writers Wagner and Grant, who were having as much fun with the names as Belardinelli was having with the designs.

***The effort required to sort out that mess of creator credits is beyond me for the time being!
Posted by alexf at 8:47 AM