Latest Prog: 1164 (printing an old but unaired episode of Hap Hazzard);
before that Prog 783

Total appearances: 196
-including 24 episodes of Preacher that were reprinted in the Megazine, and giving double credit to the handful of stories he wrote and drew by himself.

Notable character creations:
Abelaard Snazz (Dillon was certainly the first in the Prog to draw him, I assume that gives him co-creator credit?)

Orlok the Assassin (Again, Dillon was the first to draw the character, but he may have been working from someon else's designs. Who knows?)
Werewolf Judges
The Mutant (cloned version of Owen Crysler, the Judge Child – pretty sure Dillon came up with the look)
The Alabammy Blimps (I’ll never forget them!)
Tyranny Rex
Hap Hazzard and his gang
Judge Joyce (Paddy, father to Fintan from the recent Dredd story)
The new Harlem Heroes were promoted to the hilt when they debuted, with a star scan for each. As a reader at perhaps my most avid at the time, they’ve stuck in my mind about as much as they’ve failed to go down in history.**

Notable characteristics:
Sneers and snarls; economical use of lines to define people and objects; cheekbones; communicating story through facial expressions; punches that explode out of the page:


And eyes that brim over with fear...

On Steve:
Steve Dillon must have worked on some comics before he got his first gigs at 2000 AD, because he’s one artist who burst onto the scene fully formed. His first Dredd strip, Alone in a Crowd, stands out as being both delightful and as equally well-drawn as his last Dredd work some 10 years later.

For an artist often celebrated for his phenomenal speed (without compromising on quality), it’s kind of a surprise that he didn’t get more long-running work at 2000 AD for a number of years. He kicked off book 2 of the Mean Arena with a real flourish on The Jensens, introducing a team of ne’er do wells (who don’t last long against Matt Tallon and his cyborg pinkie), and generally giving everyone hilarious snarls and arched eyebrows.

If he’d stayed on to draw the rest of that series (which he could have, in terms of his facility with tight deadlines), it might even now be a recurring strip. As it is, he instead disappeared for a while, occasionally slotting in with the odd Dredd here or there; frankly not enough of them! Cry of the Werewolf is a much-loved classic, but even a minor outing such as The Wreckers was thrilling violent, too.

He should have been the sole artist on City of the Damned, a mega-epic that was aborted half-way through by Wagner and Grant. It was silly, to be sure, but also a lot of fun, and always best on the episodes drawn by Dillon.

Whether he was too busy or just not trusted to do the whole thing, I don’t know, but his episodes were the best. And his design for the evil but poorly named ‘The Mutant’ was well creepy. 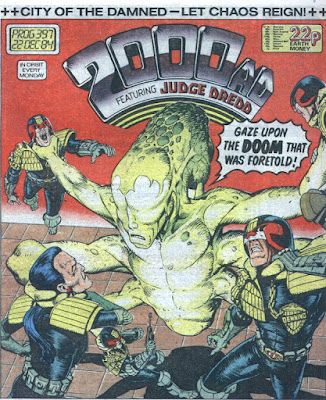 Dillon did at least get to contribute semi-regularly to 2000AD’s annuals and specials, turning in two memorable Alan Moore scripted robot tales, and the OTT action of a Hammerstein game from Diceman. Judge Dredd: Beyond the Wall, for the 1986 Sci-Fi Special, is fantastically good. One of those rare Dredd tales in which love gets to win (sort of), and Dredd appears to have some compassion, requiring the sort of emotional unsubtlety that Dillon excels in.

I want to say that Dillon’s style was forward-looking: late 90s but seen in the early 80s. But this is probably cheating, because my own experience of late 90s comics was shaped by precisely Steve Dillon, on Hellblazer, Preacher and Punisher (with huge nods to Garth Ennis, writer on all three series). I can’t help but think of Dillon’s work as good, solid, accessible comics, always a pleasure to read and never hard work – not a million miles from the straightforward pleasure of Tintin. The storytelling definitely comes first, and Dillon’s over-the-top snarls, sneers and violence help make it exciting.

So it’s a little sad that Dillon never really graced any great, long-running stories for the House of Tharg. For a while, between Progs 500-700ish he was in the Prog as often as not, mostly working on a solid but far from his best Rogue Trooper. There was nothing wrong with the story or the art, and on an episode by episode basis it provided thrills and twists – but it was never way-out weird in the manner of the early stuff. Perhaps it suffered from being too competent and coherent? More on this in another creator’s segment a little way down the line. 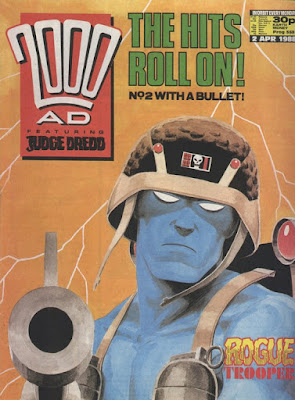 Happily enough, Dillon stuck with the character long enough to a) get the chance to script an episode, having a lot of visual fun with a story in which Rogue is temporarily blinded, and b) getting to draw the best Rogue story (ever? maybe not, but it’s close) – Cinnabar.

This tale also marked the start of Dillon’s work as, essentially, a mentor to then-newcomer Kevin Walker. Dillon provided pencils, using his innate genius for storytelling and panache, while Walker put in the graft of inking and tone. The duo went on to draw an epic (in length if not quality) run on the new Harlem Heroes.

One imagines the look of the Heroes was dictated by editorial, but Dillon certainly made each work within its remit, although there remained (for me at least) a never resolved agreement on the ethnic identity of hacker-dude Patrice. Somewhat non-stereotypical erudite black man, or ultra-stereotypical ‘kewl’ wigga? I’d like to give the benefit of the doubt, but when it comes to Harlem Heroes, there’s no doubt whatever that it went obvious an unsubtle at every possible turn. Again, more on this another time.

I will say, in its defence, that the look and feel of the group is surprisingly similar to much-loved TV series Firefly…


Along the way, Dillon would take time to keep on giving great Dredd.

And let’s not forget that this most fertile period for Dillon saw not only his investment in Deadline Magazine, but also his creation of two new characters for Tharg. And, a few times, meaning he filled out 2/3 of the Prog all by himself!

Tyranny Rex, from the fevered imagination of John Smith, was a sexy mercenary with lizard skin and a dinosaur tail. There may have been a theme about the world of art (including music, sculpture, painting, the human form etc) in the far future, but if so it was pretty muddied. Dillon was, I think, an essential part of Tyranny’s initial and to some extent enduring popularity, while Smith’s stories verged on the impenetrable.

Then there’s Hap Hazzard, a character written and drawn by Dillon who only ever had a handful of outings. Basically it’s about a twenty-something waster and his friend, and the shenanigans they get up to in and around barsh, gangsters and unemployment. You can understand why he clicked so well with writer Garth Ennis in years to come. The strip is set on an alien planet, and it involved various sci-fi elements, so it’s not at all out of place with 2000AD. In fact it’s especially in place with the tone of the comic at the time, since it seemed directly aimed at 20-something readers, and not at all at 12 year-olds who were the comic’s original target. 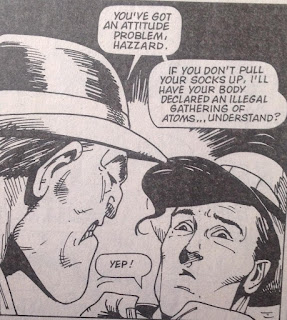 The plots and jokes in Hap Hazzard are pretty sharp, if you ask me, but something about the series feels as if Dillon sort of dashed it off to see what it’d be like to write as well as draw, maybe testing the waters of the sort of comics that would soon be appearing in Deadline. I’d be curious to know why it was so short-lived. Did Tharg just stop commissioning new episodes, or did Dillon simply run out of ideas / time to take it further?

Dillon saw out his time on 2000AD back where he did his best work – Judge Dredd. After teaming up with Garth Ennis for the first time to have fun with potatoes…

He abruptly ended his tenure with the first episode of A Magic Place, the return to one of his greatest works.

He did turn up in the Megazine many years down the line when Preacher ran there, and as I’m sure I’ve mentioned before, I thought it was a series unique and new to that publication. I was wrong about that, but so what? It’s a great comic, with Dillon’s art a treat throughout. He’s been in steady demand in the US comics scene ever since, and deservedly so. But if he could come back for one last Dredd, I wouldn’t be sorry.

More on Steve Dillon:
He has a Tumblr here (not sure how often it gets updated)
And there's a neat review here of Cry of the Werewolf on Comics Bulletin
But otherwise it's mostly stuff about his later work with Garth Ennis.

Personal favourites:
Judge Dredd: Alone in a Crowd; Night of the Werewolf; The Wreckers; The Hunter’s Club; Alabammy Blimps; Beyond the Wall; Nightmares
Rogue Trooper: Hit 1, 2 and 3; Cinnabar
Hap Hazzard

*I didn’t read Deadline at the time, but it was heavily advertised in 2000 AD, and is noteworthy for many things, not least of which was providing a training ground for future 2000 AD contributors including Jamie Hewlett, Philip Bond, D’Israeli, Shaky 2000…
Worth celebrating here just as much as on Brett Ewins’s entry.

**Hell, I even have an old home-made pack of 2000AD top trumps where each Harlem Hero got THEIR OWN card. Madness. Later iterations wouldn’t even give Sinister and Dexter separate cards.
Posted by alexf at 8:28 AM