Total appearances: 98
including a small handful as inker and colourist

Other art credits:
Tales from the Doghouse
Harlem Heroes (the reboot)
RoboHunter
Judge Dredd
A handful of one-offs 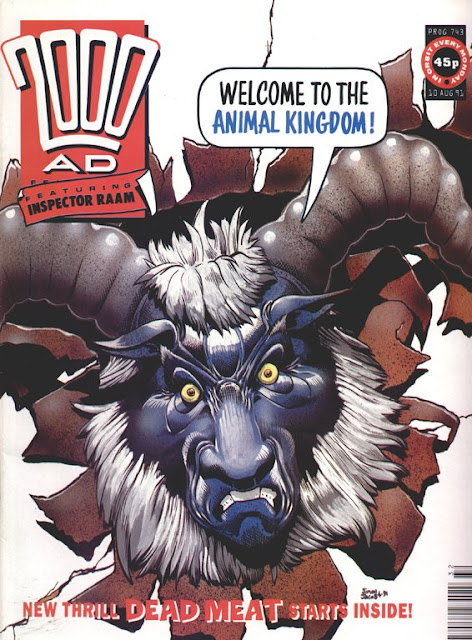 Notable characteristics:
If ever there was an artist with a super distinctive style, it’s Simon Jacob. He’s hardly unique in that regard, but by gosh it doesn’t take much familiarity with the man’s work to spot it a mile off. Describing why is proving weirdly elusive. Cartoony features on otherwise anatomically correct figures. Slightly stiff poses, even when in mid-action. Something about the way he does eyes (maybe the eyelids in particular are more noticeable than with other artists?). Very specific skin texture, too. But above all, he has a fiercely imaginative way with ectoplasmically gooey monsters.

On Simon:
And here we have another artist who was something of a mainstay for a specific time period, appearing as often as not between Progs 600-1000, and then seemingly fell of the face of the Earth as far as Tharg was concerned. A damn shame, as he was a reliable bringer of fun, to my eyes.

While he did dabble in a few established series, he’s always going to be most known for robotic demon-buster, Armoured Gideon. And he’s one of those artists who defined their signature character so clearly that other artists who have occasionally drawn the character (on covers or those group shots we all love so much) never quite get it right.

Tharg wanted to experiment with the world of Strontium Dog, expanding it beyond merely the adventures of Johnny Alpha. Somehow it never quite took off, but one of the better characters to emerge from the short-lived Tales from the Doghouse strip was Maeve the Many-Armed, brainchild of Hilary Robinson and then-newly-minted art droid Simon Jacob.

Keeping track of all those limbs (and attendant guns) shows an attention to detail that Jacob never shied away from.

See also a spate of rather jolly Future Shocks.

I suppose there’s something about the style of cartoony art Jacob uses that inherently renders his work funny. It’s certainly the comedy, even in the face of ultraviolence, that landed Jacob a few gigs on the revamped RoboHunter. His Slade is quite the gurner, and his hat has a logic all its own (although to be fair, Gibson kind of started that inadvertent trend).

He had a couple of late forays into the world of Dredd, again emphasising comedy. Not Jacob’s fault, but his one Prog Dredd was the much-reviled Awakening of Angels. More gurning again, but I’d argue he’s following in the vein of Mike McMahon and Ron Smith, not to mention the incredibly caricaturish nature of the Angel Gang themselves.

His other Dredd effort was from a special, and speaks to the sort of work he appears to be doing now – fantasy comics. Dredd is re-imagined as a knight on horseback, and it’s an eye-catching look. It’s also married to a script Jacob himself wrote, which does enough to set up the story but doesn’t have much to say beyond an excuse for some truly glorious visuals.

Stepping back in time, let’s have a look at Dead Meat. 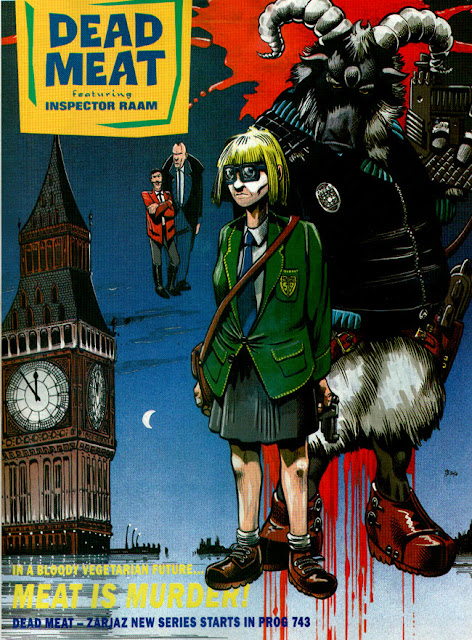 Yes, the series that re-imagined Judge Dredd as a sheep, in a world ruled by vegetarians.
Sarcasm aside, I can actually see why Tharg backed this series and promoted it pretty hard. It’s a funny idea, and it kind of predicts by some years 2000ADs ‘aching to be cool phase’, where efforts to have a finger on some sort of pulse birthed BLAIR 1 and the Space Girls. Unlike those two stinkers, Dead Meat was both clever and funny. Sadly, much like those other two strips, it never really had any storied to tell.

After setting up a future united Europe, complete with new currency the 'ecu', and showing Inspector Raam going to extreme lengths to defend a mouse form a cat, all we’re left with is evil meat eaters.

It’s to writer Michael Cook’s credit that he manages to get two whole action/mystery plots going. It’s to Simon Jacob’s credit that we care about those plots at all, largely because his designs for Raam and the uber-earnest Vera Brett.

Moustache twirling proto-hipster villains, who will only eat proper food cooked in a particular way, completed the package.

I’d have liked to see more Dead Meat, but I can’t for the life of me imagine where such a story would go. I suppose recent Disney hit Zootropolis/Zootopia kind of tackled the issue of a world in which carnivores were forced to be vegetarian, and did so with no little delight and humour.

Which leaves us with his magnum opus, Armoured Gideon. Across four books and a handful of one-offs, Jacob really evolves in style and confidence. Hero Frank Weitz (perhaps like Danny Franks before him), goes from a somewhat stiff grouch to a rather looser, more well-rounded grouch (the series wasn’t particularly interested in character development, but frankly the character was great and didn’t need developing).

Jacob’s inherent humour is absolutely perfectly matched with Tomlinson’s overall theme of the series – what if satanic cults (and the sort of buffoons who join them) really could summon up demons? There’d have to be a system in place to collect them and send them back to Hell. Jacob’s buffoons are great, but it’s his ability to draw cartoon demons and the giant robot who retrieves them that make the series something of a lasting classic.

Both Tomlinson and Jacob were finding their feet with Book 1; by Book II they both knew what they were doing, and let the comedy sing out.

Book III tried to mix things up a little by delving into 20000AD’s past. Fun if throwaway from a reading point of view, but utter delight from an art perspective. Can’t get enough of this sort of thing…

As many others have said before, Armoured Gideon deserves the reprint treatment, and not just for Book I! I’d love a digital collection, but floppies for Books II-IV (and not forgetting the specials) would be neat.

And while you’re at it, why not bring Jacob back for another humour series? I could see him doing could work on Ulysses Sweet or Survival Geeks, if a mix of artists is needed. 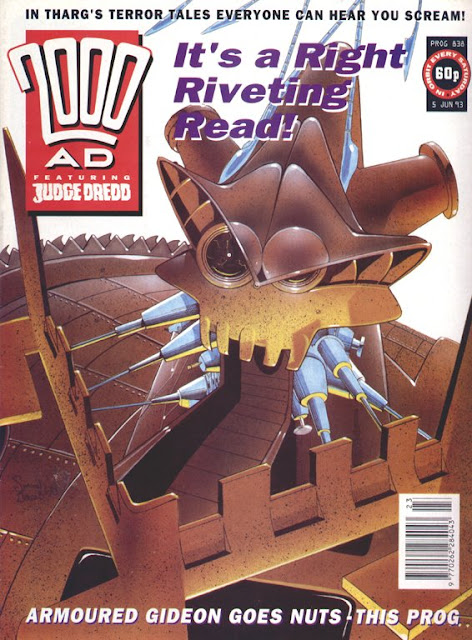 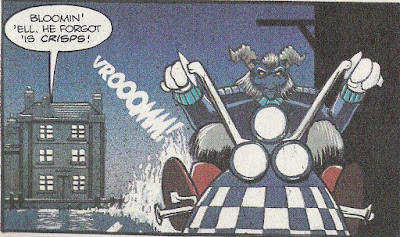 Personal favourites:
Tales from the Doghouse: Maeve the Many-Armed; Niall of the Nine Sausages
Armoured Gideon: the art is glorious throughout
Future Shocks: Digby Trench; Tree of Knowledge

*Evans the Fist, Harris from 10 Seconders - anyone else? I always like to read Dirty Frank in a Welsh accent, but he's canonically American.
Posted by alexf at 9:31 AM