Total appearances: 76
-including a bunch of inking credits

Notable characteristics:
Dude likes drawing long-legged ladies, sometimes in what you might call sexy poses. Many of which one feels were photo-referenced. To be fair, he has toned that side of his work way down in recent years, and has become noteworthy, in my eyes anyway, as one of those artists who really goes to town on loading up the backgrounds with all sorts of meticulously-rendered details. It really makes his recent strip work shine!

He’s also improved his action panels, so they have more flow and a little less of a stilted look that marked his early work.

Roach possesses one heck of a brushstroke, put to good use as an inker for a while, with some really lush lines that can hug a curve and also mark out a straight-edged piece of machinery.

On David:
Way back in the early days of 2000AD, 1977 and all that, Pat Mills and Co have remarked on the influence of a certain French comic on the look and feel on the Galaxy’s Greatest. We’re talking Metal Hurlant, or ‘Heavy Metal’, in its translated version. That comic was notable for some seriously cool artists, who delivered astonishingly imaginative and downright weird Sci-Fi and Fantasy worlds. Which 2000AD absolutely embraced right from Prog 1. Metal Hurlant also delivered topless ladies with a fair amount of frequency, which 2000AD did not deliver until somewhere around Prog 1066.*

What’s all this got to do with David Roach? Well… for better and for worse, Mr Roach is indelibly associated, in his early 2000AD work at any rate, with what has been called ‘good girl’ art. Or, to put it another way, drawing strips that lean heavily on the female characters but with the male gaze in full force. Roach didn’t actually show any topless ladies at this time, but he didn’t shy away from using some, shall we say, specific, poses.

Now, this kind of thing is not all he’s done, by any means, but it’s such a glaring feature that I have to lead with it. I don’t know what then-editor Richard Burton was thinking, but he clearly wanted it and asked for it. To be honest, it’s kind of in line with the late 80s style of 2000AD that aimed to appeal to a more grown up readership – and what’s more grown up than a comic with sexy ladies in?** 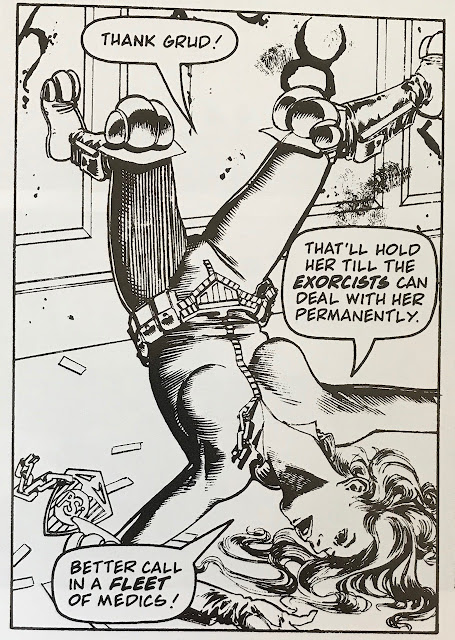 Certainly I saw Roach’s art as being ‘for grown-ups’. It’s not just the long-legs and twisting torsos – it’s his meticulous rendering of people. It’s the kind of art that looks really difficult to do, frankly, and can be super impressive, even as it occasionally struggles to have that quality of movement that action comics often need, and, especially in the early days, when he put so much effort into the people there wasn’t always time to do much in the background. Overall, Roach felt like a new direction for 2000AD art, finally embracing the sexy side of that old Euro-comics influence. It’s not a million miles from Glenn Fabry, just put to very particular use. And there’s absolutely nothing wrong with a bit of sexiness.***

Right, that’s enough of that, not least because I don’t want to denigrate Roach, an excellent artist. Let’s not forget, he was alternating art duties on Nemesis with the mighty John Hicklenton, and on Anderson with the even mightier (your mileage may vary on that) Arthur Ranson. To an extent, his Nemesis work was an intense example of learning on the job, although with flashes of greatness, but he'd pretty much got good enough to hold his own even with the likes of Ranson on his Anderson work. No mean feat!
Much like Redondo on Nemesis Book II, Roach’s Book 8 of Nemesis provided a bit of a breathing space between slices of extreme weirdness. Purity’s Story is a mostly a flashback to a setting shortly before the events of Nemesis Book I, with occasional interludes of Purity and Nemesis in the ‘present’ day. And it’s pretty straightforward stuff, with young Purity pretending to be in love with Torquemada in order to spy on him. Roach’s style delivers all this very clearly, bringing Purity to life as a person, fleshing out the rather simple goody freedom-fighter character that she had been before.

He also renders the nightmare world of Termite as a scary place, with the haunt of  thought police everywhere, and the desolate atmosphere of smooth, metallic tube walls with no greenery or anything organic around.

Pretty soon after he was a regular on Anderson, Psi Division, alternating with Arthur Ranson and playing around with a couple of different styles, depending on whether he got the colour pages or not, and just generally getting better as an action strip artist with each new story, as with so many 2000AD greats. The Prophet is fine and all, but you can sort of tell Roach at this time was far happier working in black and white.

I do especially admire the thing he does where, when showing faces in close-up, he renders them in a super-detailed portrait-study style. It’s kind of the opposite of cartooning, but because he uses the style sparingly, it has a cartoonish effect of making a panel really stand out emotionally.

I don’t think it’s controversial to say that Roach built up to a peak with Engram, a story that he co-plotted with Alan Grant. Sadly that story had to be split into two parts, with part 1 ending on a hell of a cliffhanger, and a part 2 that didn’t run for more than a year,

The wait was interminable, I can tell you! And I fear this wait slightly took the shine off that story. Briefly, it all kicks off when Cass runs a crazy-powerful psi-baby in the Cursed Earth. This baby unlocks some Psi-blocks hidden inside our Cass’s mind, which temporarily drives her insane, land ultimately leads her to learn some dark truths about her pre-Judge childhood days, and a level of manipulation by Justice Dept to hide them from her.

On the one hand, it’s classic early 90s ‘comics are all grown up and miserable now’ stuff. On the other hand, it’s actually a well-told story, with most of the emphasis on how sinister Justice Dept is, very much drawn out in Roach’s meticulous artwork.

But just as Engram finished, Anderson moved over to the Megazine, and Roach disappeared from 2000AD for some years, returning as an inker, for the most part.
(And indeed he’s devoted quite a proportion of his career to inking duties in the world of Doctor Who).

Perhaps inevitably, his return to full pencil duties was yet another sexy lady series, Synnamon. And yes, there are more legs. But there’s also a lot of attention to the expressions of the characters and the general tone of mistrust / spyworld shenanigans baked into that series.

Since then, Roach generally pulls out a new Dredd one-off every year or so, mixing up action with comedy and tragedy ably. And, occasionally, fleshing out the backgrounds to an almost Chris Weston like level of detail.

Also the odd one-off here and there, typically making use of Roach’s skill with a portrait.

A long-time reliable artist, Roach kind of took everyone by surprise when, for the Prog 2000 anniversary spectacular, he emerged as the fan’s favourite on a long overdue return to Anderson, Psi Division. He put together a genuinely excellent fight sequence between Anderson and Death,

and absolutely won the right to return as a series regular artist, where he’s really pulling out all the stops!

More on David Roach:
Outside of his role as a 2000AD/Megazine artist, David Roach is something of a legend in the world of comics history. He’s written/edited/contributed to a whole raft of books on comics, including superheroes, war comics and a certain long-legged sexy lady vampire. Check out his ‘books’ page:

But perhaps of greater interest of readers of this blog he’s worked on the important project of identifying and celebrating the uncredited creators of British comics, especially the Spanish artists who found work through IPC:

and indeed he’s still working hard to get credits for the creators of many girls comics:

Seems like there ought to be some interviews somewhere talking about his actual artwork, though, especially the Anderson stuff.

*If someone wants to chart a history of all the nudity in 2000AD, they are most welcome. I’m just picking on the ‘Sex Prog’ because it’s an easy target. In fact there had been boobs (and a whole lot of wang) before that, and plenty of both since, too.

**This is sarcasm. But also not?