-your mileage may very, but frankly every minor character created for his two signature series ended up notable in my mind - even down to the one-prog wonders such as Magnifico Loco or Judge Thorkwung.


Notable characteristics:
This is hardly the stuff of scholarly critique, but I find a bounciness and swoopiness to Davis’s style, which was present in these early days and is still there in his work today. I suppose, above all, he comes across as someone who loves to draw, and is at his happiest drawing crazy weird things going on.

He's also very good on backgrounds and clutter – as one supposes you’d have to be if you throw in your lot with Alan Moore early in your career!


And, somewhat notoriously, Davis was thought of from the very start as a 'superhero' artist - and as such almost didn't get work from 2000AD. One wonders how Dave Gibbons got himself so much work in those early years... :)


On Alan:
As I’ve said too many times, my first exposure to 2000AD was in the mid 400s, which included, pretty early on in my time, this spaffingly good cover by Alan Davis: 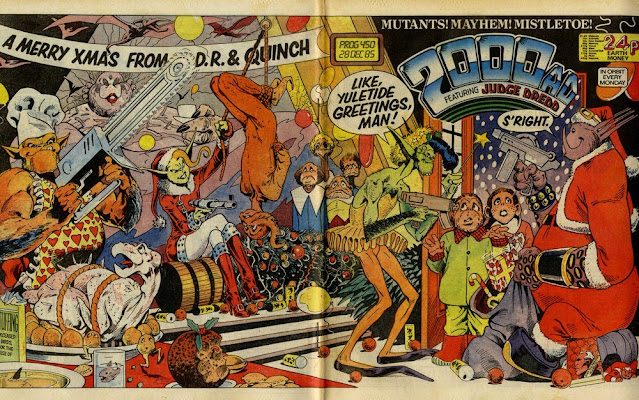 Not to mention reprints in that mightiest of magazines, The Best fo 2000AD Monthly, in which I read most of D.R. & Quinch, The Hyper Historic Headbang, and the whole of Harry 20 on the High Rock. The point is, Davis looms pretty large in my early days as a 2000AD fan. 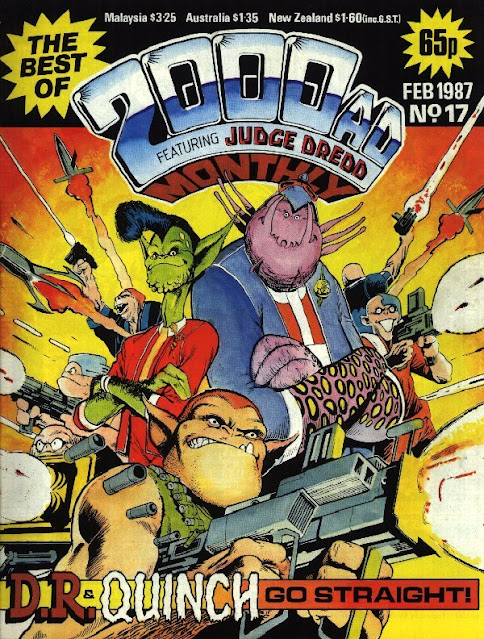 Although I wasn’t really reading the Prog properly at the time, I did notice his brief return to D.R. and Quinch on the back cover, with the short-lived Agony Pages. By the time I was properly into the weekly, he’d long gone, never to be seen round these parts again. Sad times.

However, even in that brief burst of Thargian activity (if you call 2 years and 2 major ongoing series ‘brief’), there’s an evolution to Alan’s work. Not least in that his very first piece, a front cover no less, shows both greatness and room for growth: 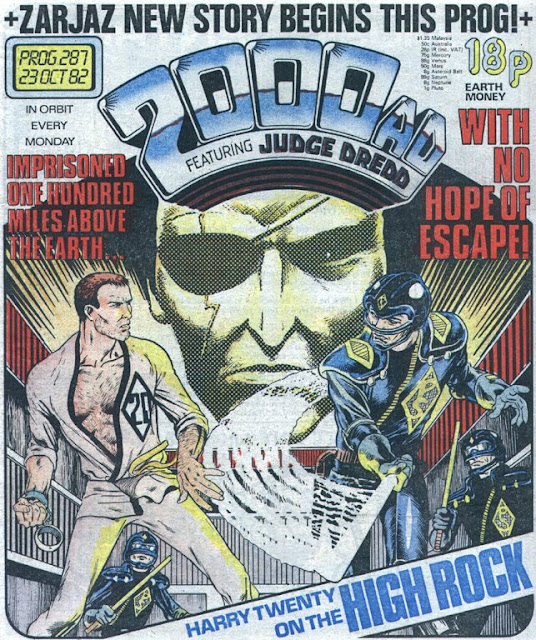 The composition is superb, but the way he's drawn the faces and figures doesn't quite have the simple confidence his work would come to enjoy. Harry 20 is a gung-ho action thriller, a classic slice of 1970s B-movie nonsense played mostly straight, with twists and turns that can leave you laughing out loud while also gasping and even fist-pumping the air in delight. Davis’s work here is kinda gritty. You know, to match the context of a run-down space prison where life is hard and there are precious few people to trust.

Davis has to design a LOT of individual characters, and he’s skilled enough to do it so we always know who’s who, even with various costume changes. And for my money, he leans just far enough, but not TOO far, into the ‘comedy’ racial stereotypes that are part and parcel of the cast. There’s plenty of room for Davis to deliver the full range of emotions and expressions, from grimacing to smiling to sneering to cowering. I like the plot of this strip quite a bit but it’s definitely a story that is elevated by the art.

It's worth noting that Davis has already made a name for himself on both Captain Britain* and Marvelman aka Miracleman before getting the 2000AD gig, so this wasn't quite his earliest work, but it's still super impressive.

D.R. & Quinch is perhaps the literal opposite of dark and gritty – it's a comedy about students filled with aliens and set neither on nor near to planet Earth (well, apart from that first story). It, too, evokes American B-movies of the 70s, although it’s more ‘Animal House’ and less ‘Escape from Alcatraz’.

Frankly this series is so well-loved and so oft-reprinted that there seems little point me throwing more words into the mix. People can and do argue that the stories are either dated or crude – not sure I agree, they tend to make me grin and chuckle even today – but I’ve never heard anyone argue that the art was a problem. Again, it’s the sense of glee, of D.R. menacing grins, or Quinch’s implacable happiness, and the joy of just seeing so much stuff lying around, whether it’s guns or books or general detritus.


Some years later, Davis was first in line to draw a proposed Batman/Dredd crossover. He’d already been working on Detective Comics, and had a go at a Dredd strip as a warm-up. It’s decent enough but the story told didn’t really give him much of a chance to show off Mega City 1 or its crazed citizens.


I believe it was purely a matter of scheduling conflicts that meant he didn’t end up doing that crossover. It’s surely his wild success with American superhero comics, including delivering all-new series that he wrote as well as drew, that kept him away from 2000AD. I’ve not heard of Davis specifically as a creator who fought for better rights, but certainly he comes across as an artist who only draws material that he really wants to draw.

His style and energy have, I think, informed a number of 2000AD heroes who came after him, although there’s no one out there who draws in quite the same way. Neil Googe perhaps comes closest, but I can see hints of Davis in Paul Marshall and Nigel Dobbyn, too.

More on Alan Davis:
Some interesting tidbits on a Captain Britain fansite about Davis's very early days, including the transition to 2000AD.
Some rare artwork visible on this Davis celebration page from a designer's blog.
And best of all a longish interview with David Bishop preserved for posterity on Vicious Imagery.

*I don’t typically bring up non-2000AD work in this section, but I can’t help but note that Alan Davis’s work on Captain Britain, both before, during and after Alan Moore as writer, is my single favourite version of a superhero comic.