Notable characteristics:
Dude seems to like Soviet stuff, what with his first strip being about Laika, his series Samizdat Squad, and his resurrection of Orlok the Assassin as a character with more stories to tell.

But in general he comes across as someone who is deeply interested in the 2000AD-ness of 2000AD. He doesn’t go gonzo crazy in the vein of Al Ewing, but he does have a knack for picking out some pretty weird sci-fi ideas

and putting them on the page to see what happens. And then mixing that up with the stoic word-light action beats of a John Wagner.

Oh, and hardly worth picking out for any given 2000AD writer, but he’s got that dry British humour thing going*. 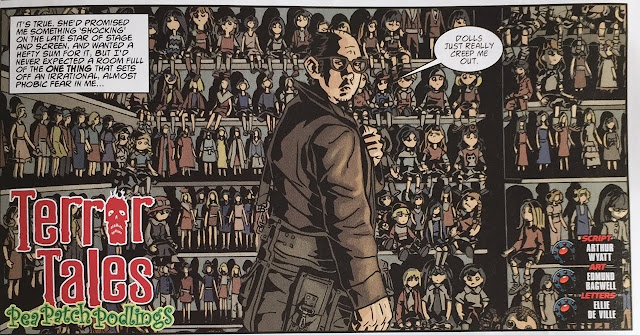 On Arthur:
Another winner for Tharg, gleaned from the talent pool of fans-turned-pros. Wyatt co-founded FutureQuake, one of the best 2000AD-inspired comics (and he may have worked on fanzine Class of '79 before that?). He got his Prog break after winner one of the pitchfest competitions, leading to a Past Imperfect story. From there, more one offs showing a variety of genres, slowly but surely becoming one of those names you start to recognise in the credits boxes.

And from there, gamely picking up a series that creator Gordon Rennie had left dangling, the 86ers. Not sure if Wyatt approached Rennie, or if Tharg asked Rennie if he could hand the baton on to someone else, but whatever the route it all seems to have been amicable.

Little by little, Wyatt has taken his opportunities and grown with each one. Most recently, he seems to have become the lead writer on the continuing comics adventures of Dredd, from the movie. And it’s his most accomplished work to date, I’d say. But I am waiting for him to unleash a more personal creation that really lets him make his mark. Looking back over his career, all the ingredients are there…

I’m inclined to do less waffling this time and more showing a selection of panels from across the years of Wyatt’s tenure.

There's some classic comics storytelling in these kinds of one-offs. Wyatt sets up some kind of threat, then conjures up an in-story mechanic to defeat it, unafraid of both science and fiction.As often as not, in the 2000 vein, he's also only willing to put up with a certain amount of po-faced pontification from his characters...


There's even space for a little poignancy, as long as it's delivered with a bullet...


When working on multi-part stories, Wyatt likes to break up the intricate ideas with extended action sequences, and why not?


Wyatt's work with Dan Francisco was a lot of fun, developing Wagner's original concept of a Judge who doubles as a relaity-TV star, but now with the added layer of a) having been a somehwat disgraced Chief Judge and b) not being on TV any more. I'd liek to see more of the character, although with that character beat addressed, I can see how it'd be tough to tell Dan Francisco stories that weren't just Dredd stories with a different lead character. See also: Judge Hershey and her slew of well-menaing but never quite successful solo stories.

Wyatt's first original series proper, Samizdat Squad, is yet more 2000AD super-essence, with the slight filter of being Soviet-inflected, for whatever that's worth. Like the Inspectre before it, the strip is rooted in the aftermath of the Apocalypse War. Unlike the moodiness of the Inspectre, it plumps for hard action, with sardonic banter. Basically it's like a good late 80s Dolph Lundgren film series, that never actually exsited.


Staying Sov, Wyatt served up a handful of outings for Orlok the Assassin. It's kind of James Bond / MACH One-ish in its tone, and frankly the need for 'the adventures of young Orlok' is unclear. But, and this is the point, Wyatt used it as an opportunity to riff on some increasingly weird SF ideas, and if it took a spy-angle to do that then more power to him.

Lately, to my mind, Wyatt has taken a big leap in quality. His two most recent Dredds have been just excellent, following an unsual team of science research cannibals and Jimping ape. There's horror, action and emotion aplenty in both tales, and I hope it heralds more strips and more confident innovations to come.

More on Arthur Wyatt:
His website
An interview on Starburst
He's a guest on an episode of the War Rocket Ajax podcast

*You’ve got to look pretty hard to find a 2000AD script that lacks this key ingredient.
Posted by alexf at 7:00 AM