Total appearances: 90
-including his work on Crisis, and with a double score for the stories he wrote as well as drew.

Other art/writing credits:
A single episode of Dredd,
New Statesmen
Maniac 5
The Spider (from the 2000AD Action Special curio)
and a handful one-offs

Notable characteristics:
As an artist whose style was clearly in development during his time at 2000AD, it feels a little harsh to call out certain things, but I would say that early Hine is kind of flat. Later Hine gets much fuller, and is not unlike a British comics version of Manga – although again this may not be his style per say, but the rather a specific look he wanted on Mambo, which is 100% a British version of anime/manga. More on this later.

He’s definitely cartoonish rather than realistic across the board, and in that good way that makes it easy to read from one panel to the next. He’s interested in drawing up large casts of characters who are all more or less ‘normal’ looking, but in their own distinctive way. You could even say that he draws British-looking comics in a very classical way - gives everything simple, clean, clear outlines, inks them, so they can be coloured in without mucking about. (I think sometimes he coloured himself, but not always?)

In fact, even within the weird world of Mambo, it’s definitely a characteristic of Hine’s to show people going about their daily lives, something that must continue regardless of any extraordinary circumstances.

That’s all Hine the artist. Hine the writer is associated strongly with one big trend: body horror. Like, full-on John Smith / David Cronenberg / Shunya Tsukamoto body horror. And yes, as far as 2000AD goes it’s only really Mambo. But a glance at Strange Embraces and even his Marvel work on the X-Men world reveals it’s a general passion of his. I love me some body horror.

On David:
After various odd jobs here and there, for example helping other artists out on new Statesmen, I feel Hine’s story begins with Sticky Fingers. I remember Tharg telling me it was the best thing ever. I didn’t get to read it at the time, but did in my early 20s – in theory the ideal time to pick up a story about impoverished 20-somethings bumming around in Camden.*

Not my thing, apparently. I appreciate that its comics telling an incredibly different kind of story from what I usually read in, say, 2000AD, but nothing quite stood out. Hine’s character design is neat, his storytelling through expressions and body but it’s not enough to sell a group of characters I didn’t gel with. 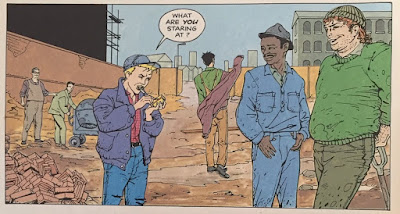 I can well believe it was pretty ground-breaking at the time it was originally published (before I’d read any American comics that trod similar-ish ground, e.g. Bob Fingerman, Adrian Tomine, Chester Brown etc), and evidently it struck enough of a chord with readers and editors alike to earn Hine and writer Myra Hancock** a slot on 2000AD, kind of doing the same sort of thing but now with a Sci-Fi twist.

And so we get Tao de Moto, an almost-never talked about 2000AD story that is all kinds of delightful, certainly way better than Sticky Fingers. When I say ‘delightful’, I don’t actually mean it’s an overlooked gem of a story as such, but it delighted me then and still that it ran at all, and that it was bringing me a storyline and characters that just hadn’t been seen before in the comic.

For a start, the lead characters are from, variously, Thailand, Japan, Hong Kong and Sweden (I think?). For a second, the story is about surrogacy, alien DNA, and personal responsibility. For a third, the story was told, mostly, in small 1-page chunks.

This had been done before with Sooner or Later, but where that strip was going for out and out weirdness (both in story and art), Tao de Moto was aiming for a newspaper strip style weekly hit of soap operatics. And achieved it pretty well. If there’s a problem, it’s that each episode was perhaps too self-contained, meaning that, like on many TV soaps, the motivations of each character made sense for that episode but then seemed to alter dramatically for the next.

On the other hand, one of the points of the strip was that we readers never really knew who to trust. We’re definitely meant to like Tao herself, but we’re not always meant to trust that what she says is true, or that she even really knows what she’s doing or why.
As for the scheming Sopalco and best friend Lola, who knows what they’re really looking for?

The other big problem with the strip, of course, is that it just kind of died. After a decent opening run in the Prog (which I guess too many readers didn’t like), it garnered a send-of episode in a Winter Special that resolved not nearly enough. So it goes.

A detour now in the story of David Hine to spotlight his first actual work in 2000AD: some arty covers. And when I say arty, I mean Andy Warhol: 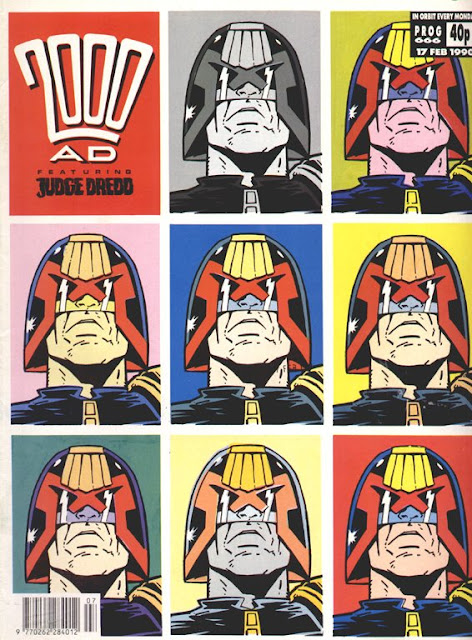 I wonder if this is the sort of ‘appealing to the right-on NME crowd stuff’ that Pat Mills and others objected to so much? Personally I think it’s all good fun.And let’s not forget this cover from Hine, which is just straight up action with one of my favourite film-linked puns.

Hine’s design sense also earned him the honour of being the droid who delivered the opening salvo of the 1993 Summer Offensive.

He even got to introduce the world of one of the stars of that line-up, Maniac 5, in a special story that served as a prologue. With a touch of body horror, you’ll notice.

And so on to Hine’s magnum opus, as both writer and artist on three books of Mambo – a story that Tharg actually did deign to let run it’s full course.

Unlike Sticky Fingers and Tao de Moto, this one’s a full-on genre piece, being a mash-up of ‘alien world’ sci-fi and police procedural. It’s also an homage to the then-super popular ‘Manga’ video line.*** In case the setting, the art style and the tentacles didn’t give it away, he’s also careful to name drop Katsuhiro Otomo (he of Akira fame), and Masamune Shirow (of Ghost in the Shell / Appleseed fame).

But this is just him saying ‘I love this stuff, let me play in that vague milieu, Tharg, go on’. The story and characters are Hine’s own. At this point, Rachel Verlaine, police detective with a face mask was only Tharg’s fourth in a long, long line of hyper-competent red-haired action ladies,**** but actually her face mask design and the contrast of the blue jumpsuit with the pink hair made her instantly memorable (in a good way).

The first story starts off as a fun police story with some delightfully Sci-Fi cliffhangers, before getting a little bogged down in a backstory that was not like but unfortunately reminiscent of the same era’s Firekind. The alien culture and evil mining corporation may be clichéd but are at least delivered well.

It’s also worth pointing out that the strip overall was unusually new/young-reader friendly. It wasn’t trying to score intellectual points a la Smith or Milligan (which I happen to like, and which in fact Hine has gone on to do more of in his own work, and well), nor was it trying to show off its bad boy attitude, a la Millar or Morrison (which I only like in moderation). Some of the dialogue wasn’t up to the very high standard of a John Wagner or a Dan Abnett, sure, but the body horror weirdness of the ideas and the art was pure 2000AD.

But then in Mambo Books II and III Verlaine comes back to Earth and gets to do more detective stuff, know with the added fringe of this weird and creepy tentacle/psychic body growth thing happening.

Plus, a super cool villain design, the oddly-monikered but amazingly creepy Skinhead, who came in several iterations, and was a very early riff on the ultra-contmeproary woes of online trolling, cyberbullying and such. 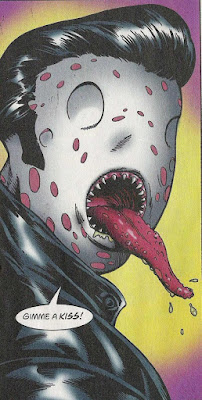 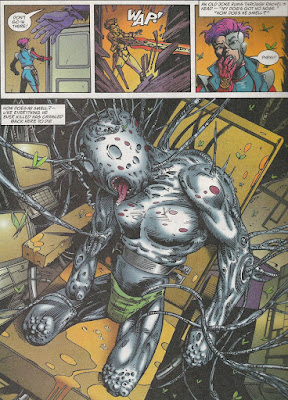 And some good ol' melodrama.

You’ll also notice there’s some experimental things going on artwise. Like Carlos Ezquerra at the time, Hine was tinkering with computer effects. It certainly fits the anime vibe, but also like Ezquerra it looks super dated now, even bad. I’m curious to know if it’ll actually look better again in around 10 years time, when this early CGI stuff starts to look charmingly old-fashioned (like a lot of 70s / 80s practical effects in film).

One of the last things Hine did for Tharg was a one-off Dredd that has the distinction, for me, of being one of the most clear homages to Mike McMahon I've seen - despiter Hine's natural style having almost nothing in common with the great one. Check out this Dredd - it's pure Mike McMahon, circa Prog 150.

I don’t know if there was ever a chance of Hine’s idiosyncratic comics such as Strange Embraces finding a home in 2000AD, but as it was he hasn’t been back in the Prog since mambo ended, but has done rather well for himself both in and out of the mainstream. He’s earned his place as a Hero in my book for the deft feat of straddling two worlds of 1990s 2000AD – being super hip, but also super-reader friendly.

More on David Hine:
His blog:
A very brief career overview on Wikiwand

There are plenty of interviews about his more recent work, e.g. Bulletproof Coffin (recommended for fans of the weird!), but sadly nothing about his time on 2000AD.
This interview on Broken Frontier is probably the best at giving some insight into his general worldview. 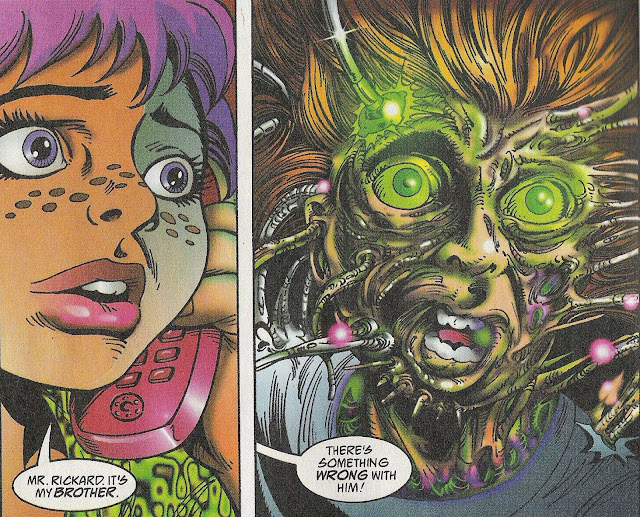 Personal favourites:
Tao de Moto:
Mambo: Fleshworld (it’s all one thing really, but I did like the middle episode especially)
Judge Dredd: Blowout

*At the time I was myself a 20something bumming around in Camden, in between temping jobs and stints at University. Although by contrast to the Sticky Fingers crowd, I was never flat broke or without a home, making it an entirely different experience. I am so on the wrong side of Pat Mills’s class war it’s not even funny. For what it's worth, I did enjoy Lux & Alby, by Martin Millar & Simon Fraser, which mines similiar territory but with a supernatural bit.

**Sadly not going to appear on the blog anytime soon, as she only ever got two story credits

***The super confusing name for the video company that released a bunch of Japanese anime on VHS in the early 90s. It’d be like me setting up a film distribution line in Japan that specialized in, I don’t know, Ken Loach films, and calling my company ‘Comics’.