Latest Prog: 1957, but more recently the 2016 Free Comic Book Day comic, and the Sci-Fi Special, too

Total appearances: 87
-not including his film reviews, or his text stories, e.g. the Judge Anderson novel: Year One (on sale now!)

Creator credits:
Dandridge
Age of the Wolf
Realm of the Damned

Notable characteristics:
Broadly speaking, horror and comedy, both together but more often separately.

And, within horror, he has apenchant for the creepy gets-literally-under-your-skin type of body horror grue. Possibly as a direct result of being a film critic, Worley more obviously than most seems to make a point of setting up clichés and then subverting them. Which is not the same as twisty plotting.

On Alec:
One imagines every writer who has worked for 2000AD has a background in something that isn’t simply writing SF/fantasy/adventure stories, whether in comics or prose. So I don’t tend to bring it up. But I can’t not with Worley, as he spent many years as a regular name in the Megazine, being the monthly film reviewer. And boy, were there endless debates about whether the Megazine should even run film reviews at all. My answer was always, sure, why not? And Worley’s reviews, in particular, I found insightful and fun to read.* And, mostly, his tastes seemed to align with my own, meaning I was pre-disposed to want to like his comic strips when they first started appearing, in the usual Future Shock, Terror Tale, Tales from the Black Museum slot.

I also mention it because two of the long-form stories Worley has contributed – Age of the Wolf and Dandridge – are both steeped in film, and my reading of both is that they make a point of zigging when the sorts of films they were inspired by would zag.

Also, and I’ll be honest here, I don’t have a hell of a lot else to say. I think Worley’s one-off tales have consistently been great, especially his occasional Dredds and Anderson work, and that his long-form stuff has been fascinating, well-worth re-reading, and shows signs of getting better each time.

Here’s a sample of his short stories:


Worley’s 3riller, Six Brothers, is a particular standout. It’s intricately plotted, and has an inherently clever device of retelling the same story form the point of view of three different characters (read it to understand why 'Six Brothers' is a clever name) across each episode, an ideal use of the 3riller format. Having Michael Dowling on art duty for a supernatural noir doesn’t hurt, either.

An early Past Imperfect had introduced Dandrige, a super-charming ghost-hunter who is himself a ghost. I’m never sure whether these one-offs that get converted into series were conceived that way, or if Worley genuinely hit upon a character that Tharg liked enough to ask for an expansion on.

Dandridge proved witty and clever enough to merit a few short series, but evidently not enough to keep going – but for a while there it was one of those rare 2000AD strips, a reliable daft comedy – perhaps the first really successful one since Ace Trucking finished? It’s in the mix of plotting with charming characters, including a straight-man to keep the comedy flowing: Shelley, a Frankenstein’s monster version of the poet who helped inspire the original Frankenstein.

If nothing else, the arrogance of Dandrige coupled with the escalating silliness of the plots surely helped win Worley the chance to script some RoboHunter, and I’ll be damned if he hasn’t come the closest yet to recapturing the lunacy of the Wagner/Grant heyday. I wonder if he’d dare to try a multi-parter on that one day?

Age of the Wolf, which actually began before Dandrige, couldn’t be more different. I don’t know if it was conceived as a trilogy originally, but in lots of ways it’s the overall trilogy arc that lingers in the mind, and makes it a series well worth reading (or re-reading). I’ll confess that week to week, I couldn’t always keep up with what was going on, partly because of the relentless flow of characters and ideas, but also because of Worley’s deliberate overturning of various tropes, which mean you really do have to pay attention!

Let’s have a look at the film stuff first. On the trilogy thing, it kind of mirrors Mad Max. Book 1 is very much during the apocalypse. Book 2 is post-apocalypse, but only a little bit (and has a hilarious specific call-back to The Road Warrior).

Then Book 3 is way, way down the line, when the apocalypse has given way to what amounts to a whole new society. We can only hope that Worley and David-Hunt return in 15 years with an epic Werewolf chase movie complete with flame-spewing guitar.

Of course as it’s about werewolves, you’d expect a certain amount of werewolf movie referencing. Subverting expectations #1: Worley does very little of this. In fact, the only callback I could easily spot is having a scene set on the London Underground, as in An American Werewolf in London.** 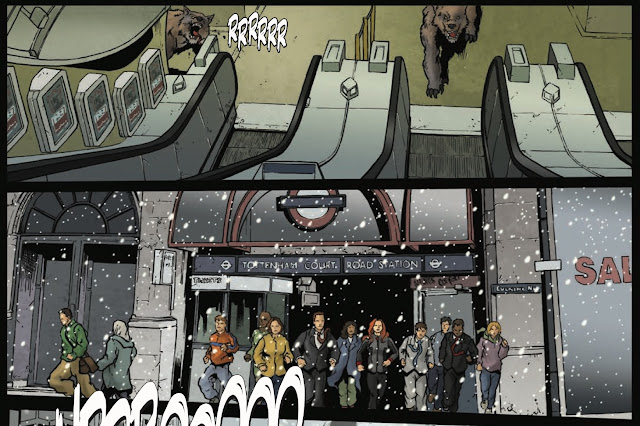 Instead, Worley’s script in book 1 reads a lot like a zombie movie, especially 28 Days Later, with a hint of Dawn of the Dead (the bravura opening sequence of the remake version, especially).

Let’s crack into the story itself. I’ll be honest, I don’t fully understand it. There’s some kind of ancient prophecy/curse that means the Full Moon appears in the sky and then never leaves, setting off a Werewolf plague, or whatever you want to call it. Awesome premise!

Our hero, Rowan Morrigan, has visions of her long-dead grandmother explaining that she is destined to break this curse – although in doing so she must kill herself. Basically the rest of Book 1 is all about subverting this trope. Rowan is determined a) to help break the curse, but b) not to have to sacrifice herself, or anyone else, along the way. Much of it is achieved by her discovering an ability to perform magic by drawing runes that bestow various powers, such as immunity to the werewolf bite.

Rowan also tries very hard to keep up a flow of sarcasm which lightens the weirdly serious mood (for a comic about a plague of werewolves, it is oddly serious).

In a way that I don’t entirely understand, she manages to fail and succeed in every way possible. She does break the curse, but has to sacrifice someone else. She also dies (I think), but sets up a cheat that immediately brings her back to life. And for some reasons, the wolves still linger around, but the basic apocalypse is over.

So full marks to Worley for managing the unexpected, but I felt I needed a little more help. More of the same ensues in Books 2 and 3, in which Rowan pits herself against first an evil human-clan matriarch, 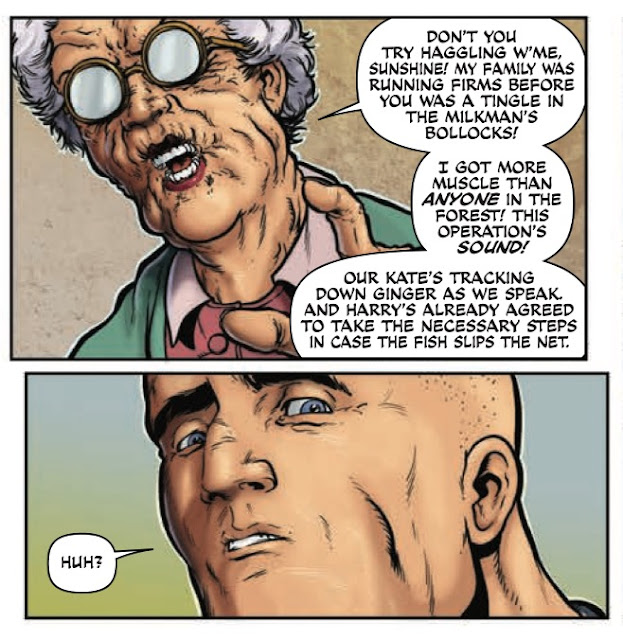 and then an evil wolf-clan matriarch: 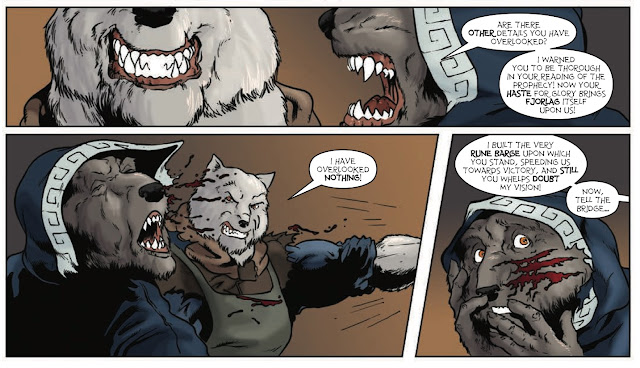 And manages to succeed in ways the reader will struggle to predict, but sometimes also to understand…

Luckily, Worley fills each episode with plenty of opportunities for Jon Davis-Hunt to do his crazy thing with slavering beasts, gore and action beats. 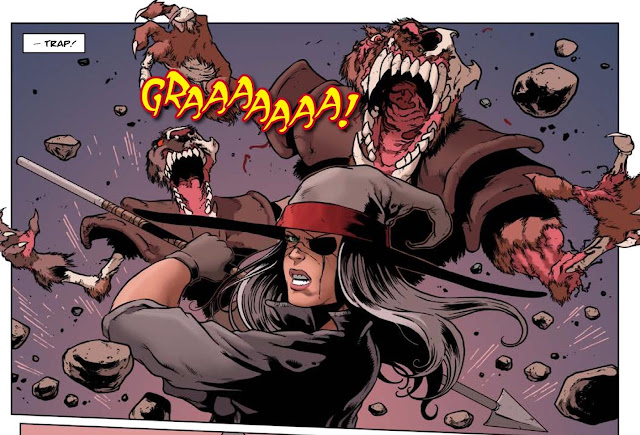 You’ll notice it’s all women in leading roles all the time here, which is to be much applauded. We also get a prominent Muslim character (in book 2), who finds himself in a major quandary when Rowan wants to tattoo him with a protective rune, but he refuses on religious grounds.

By the time that epic trilogy was over, Worley generally seemed more confident with his one-off work, especially on Dredd and the like. More than most post-Wagner/Grant writers, he seems to nail those stories that pick up on a hapless citizen and follows them around before they have a brief encounter with the Judge himself.

His Anderson: the Deep End was great, too, showing a lot of character work as opposed to tricsky plotting and banter. More than the Dredd sequels, this one makes me want a sequel, or at least a TV show spin-off, perhaps one that doesn’t need Dredd himself in it as an actual character, more a legendary figure… 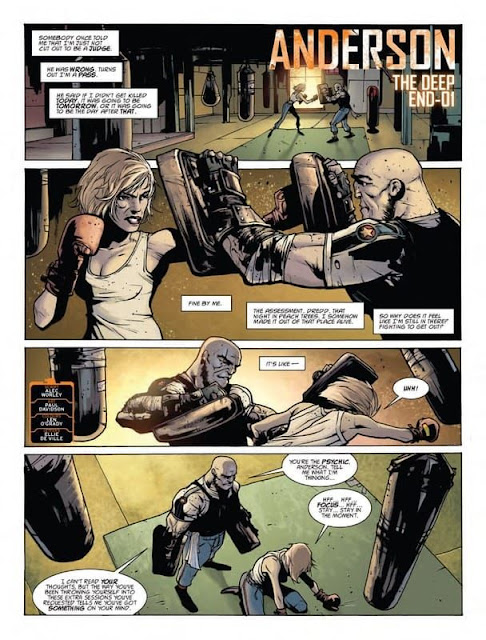 Which leaves us with Realm of the Damned, a series that was never intended for Tharg but ended up in the Megazine anyway, causing the biggest letters column furore since Nixon and Sloano.

Because of all the swearing, you understand, and perhaps a little bit for the nudity, but not because of the extremely extreme gore. The extremes of all these things are, for me, the entire point. Realm of the Dmaned starts from a ludicrous premise – what if death metal music was in fact a documentary, describing real demons and the effect they have/would have on the world if unleashed?

Well, the answer is that there’d be lots of horrible demons / vampires / gods running/flying around generally biting off each other’s heads and pissing down each other’s throats. Mostly while being naked.

And yes, seeing some of this stuff rendered as comics can be pretty shocking, and I’ll admit I’m the sort of reader who enjoys the jolt of a good shock now and then. Beyond the shocks, there’s yet more of Worley setting up characters and clichés that he deliberately doesn’t pay off in the way you might predict – but again sometimes with the impact that it’s a little harder to get into the story.

I’m super excited to see what he does next. Let’s not forget, at this point every major strip Worley has written for Tharg has been bound up and sold as a proper book-sized collection, which is no mean feat!

More on Alec Worley:
Here's his website
Which includes a neat blog, including an essay on the five types of twist ending
And he was on the second of half of a recent ThrillCast episode

Personal favourites:
Judge Dredd: Duty Calls, That extra mile
Dandrige: good clean fun from start to finish
Age of the Wolf: I like bits of all of it, but probably Book 1 is the best
RoboHunter: The Droid Dilemma, The Bodj Job
Anderson: the Deep End
3rillers: Six Brothers
Realm of the Damned

*Previous incumbent Si Spurrier had sort-of written film reviews, but they tended to be long-form rants about just one film or style; follow-up reviewers I think have had to contend too much with the whole question of whether their place inn the Megazine was valid.

**This could in itself be a meta-reference to the fact that there has only ever been one werewolf movie actually worth making a reference to. All the others are either terrible or at least not-well liked. The one exception being Ginger Snaps, which only about 12 people have seen. We all recommend it heartily, though!
Posted by alexf at 9:30 AM