Total appearances: 87
-including the recent ‘Man from the Ministry’ creator-owned bit in the Megazine

Notable character creations:
Tanner
(I have a soft spot for Tanner’s supporting cast, too, but I wouldn’t call them notable)

Notable characteristics:
Clean style. Angular lines. Punch-ups, dust-ups, zapping and action sequences galore. There’s a reason he went on from 2000AD to draw Iron Man* for a number of years.
He does a neat line in generic baddies wearing the 80s version of futuristic garb:

I also love the way he draws hands and fingers, it’s a communication device in its purest form!

On Kev:
Some context here – my history as a 2000AD reader meant I followed the Prog very sporadically between 439 and 500ish, then abandoned it in favour of Whizzer & Chips for a brief period**.

I cam back to the Prog around 640ish, all of 12 years old, and proceeded to read and devour the missing period (thanks to my big brother’s stash). This included Night Zero, which at the time I thought was about the most sophisticated bit of writing ever, full of twists, surprises and that sweet, sweet noir atmosphere. This is not, I think, a commonly held opinion. But I can’t forget that feeling and will love this series till my dying day.

Even now that I see it for the cliché-fest it is.

A HUGE part of my love for it was and remains the welcome relief provided by Kev Hopgood’s art. It made the series look grown-up, with its hard men, hard women, sultry women and Taxi Driver evoking mood. The art also allowed me to follow what was going on from panel to panel, unlike contemporary artists such as John Hicklenton (on Nemesis IX), Will Simpson (on Soft Bodies and Judge Dredd) and Simon Harrison (on the Final Solution). Frankly, Hopgood and Night Zero provided me with an island of sanity in a morass of art, ideas and creative insanity that I was not equipped to handle back then.

I do get, in hindsight, that he was dutifully filling the Burton-mandated slot of ‘stories for 12-year-olds’ – you know, the readers the Prog was originally intended for.

And poor old Hopgood continued to shoulder this burden, with two more adventures for Tanner and the crew of Zero city, with stand-alone adventure series Dry Run, and of course Harlem Heroes. Hopgood gamely finished off series 1, and pencilled a second series that was shelved for years before Tharg decided it’d be fun to get Siku to paint on top of it and make it so over the top readers couldn’t fail to see the joke.

OK, that’s the context, what about the art itself? Personally speaking, much as I can understand why readers and fans don’t express much love for the stories Hopgood worked on, the way he drew them was a) exactly appropriate for the strips, and b) really bloody good.

Like many an artist, he began with some Future Shocks that gave him a chance to develop his style.***

Night Zero was the brainchild of the late John Brosnan, then 2000AD’s resident film critic, and I think a buddy of Alan McKenzie from his Sci-Fi/movie magazine days. It’s a sci-fi noir that trades in action movie and thriller clichés, while deliberately subverting them. Brosnan’s big thing was about having women who appeared to conform to a stereotype, only to then be different, only to then revert to type again, sort of.

Trapped in the middle is Tanner, an ex-soldier turned cab driver who basically doesn’t give a crap about anything around him, but is a decent enough guy that he’ll help someone who’s in a jam. With a robot arm that shoots lasers. Your typical 2000AD hero, in other words. I lover Tanner.

Hopgood fleshes out the world, designing a combat-proof taxi and some smoky mean streets, and a fashion sense right out of 1980s action movies. The cheap kind, like Death Wish 3 or Class of 1999 what have you.


Tanner wears a vest and a sleeveless jacket (to show off his arms). Femme fatale (or is she?) Alanna wears a slinky dress under a trench coat. Evil crime Lord (or is he?) Mr Nemo wears a dressing gown. And then there’s Dolly, who is either a laudable example of an under-represented group, or else an insanely backward cliche of a butch lesbian. You decide!


The silliness continues for two more stories. Beyond Zero introduces a feminist robot and a daftly stupid action man, both proving good for some chuckles.

And of course, a cover for the ages:

The strip ended up in full colour in Below Zero. For some reason this final outing seems to be much hated. Yes, it’s kind of a ‘virtual reality prison’ story writ large, and yes, there are parts of this basic setting that reminded readers of Total Recall (then a recent hit movie). But I remember not being bothered by that and enjoying it. Of course Hopgood’s art is just getting better and better by this point, and the switch to colour makes a lot of sense given the virtual reality angle.

Backpeddling to Dry Run, well, there’s a long-lost series I won’t defend. Its main problem is that it’s boring. It’s the future, and Earth is all dried up, so water is a precious commodity, and most of the world is barren desert where the oceans used to be. People roam around in Mad Maxish gangs, only with less fetish wear. Our heroes are one such gang, who share a psychic report. Nice ingredients, could be fun.

20 years later under Dan Abnett and Richard Elson, Kingdom WAS a lot of fun, and it’s not a million miles away in the sort of story it’s telling. But Dry Run, written by Tise Vahimage****, couldn’t quite find the angles to keep the story dramatic and thrilling beyond, well, the cover that set it up...

Hopgood does his 80s action thing with the designs and they’re find and all, but overall the whole thing felt a little too functional.

After seeing out the end of Harlem Heroes, the interminable first series, Harlem Heroes: Cyborg Death Trip provded an interesting experiment in ‘spot the artist’, (with Siku at first colouring over Hopgood's basically finished art, then later going nuts with the paint) but is hard to take seriously as a story. I will say that Hopgood maintained his appeal to my inner 12-year old Sci-Fi action comics fan. And he got to add two new members to the cast who are right out of The Running Man era of hard-nosed but noble-minded thugs.

And that would have been the end, if Gordon Rennie hadn’t plucked Hopgood out of nowhere – or away from Doctor Who comics, at any rate - as the perfect artist to render one of his more recent slices of Brit TV nostalgia, Man from the Ministry. Lots of shiny metal corridors, people wearing sharp suits, and a story driven by relentless action from panel to panel that needs the clear storytelling skills of a Hopgood to work as well as it does.

Let's round off with a handful of covers, which never do less than sell the promise of action galore for the pages inside, ideally with a side of hot metal death... 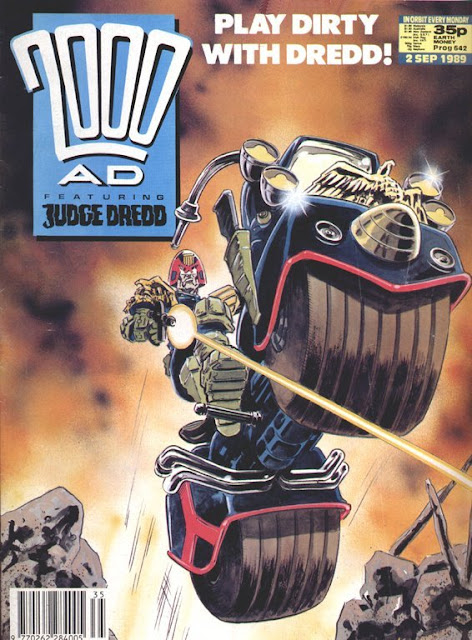 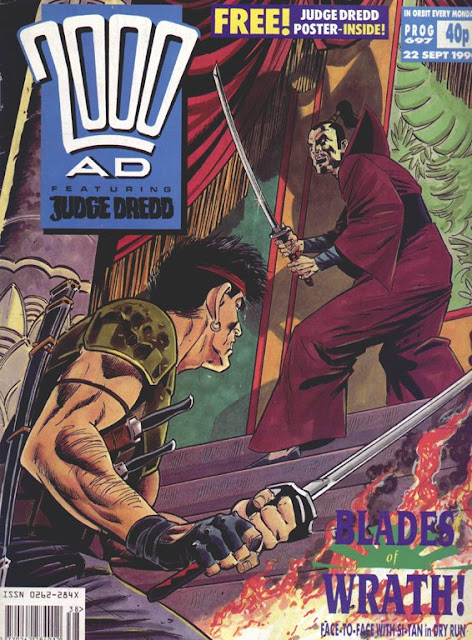 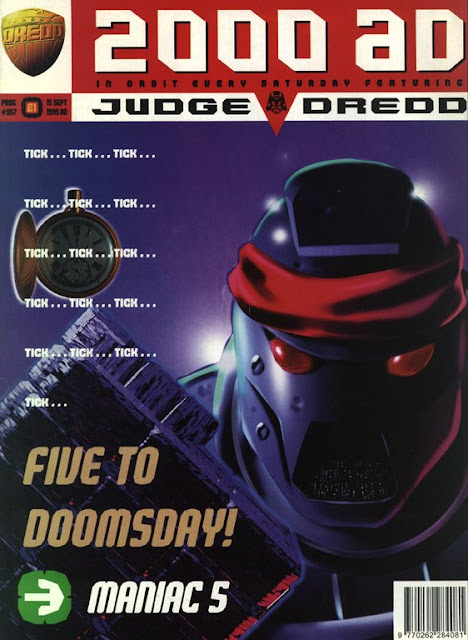 More on Kev Hopgood:
His blog:
An interview about his time on Iron Man
and indeed a YouTube clip about War Machine
Not much online about his 2000AD days, sadly. You'll have to dig out Megazine 350! 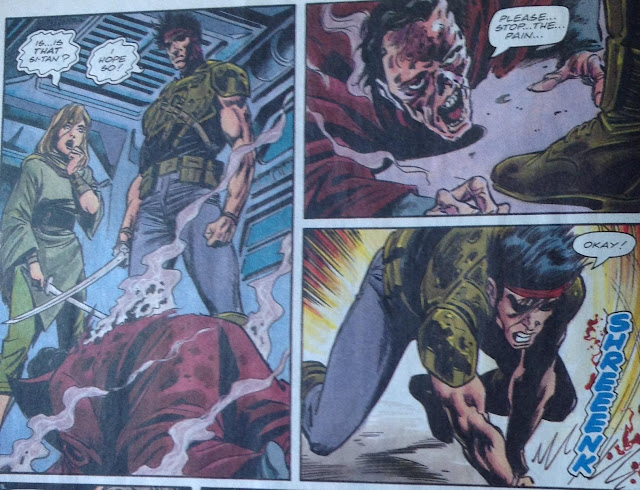 Personal favourites:
Night Zero, Beyond Zero and, yes, Below Zero.
Man from the Ministry

*He even designed War Machine – the armoured version, that is, not Jim Rhodes the long-standing character who fits inside the armour. But it's given him an international superhero legacy to match another 2000AD alumnus with a Marvel hit on his hands, Mike Collins.

**My favourite character from that time may have been Watford Gapp, the King of Rap, who I suspect is at the very bottom of Rebellion’s ‘reprint this now!’ list.

***And I guess he honed his skills over in Marvel UK, where he drew the much-forgotten toy tie-in Zoids, scripted by Mr. Grant Morrison. I am exactly the right age to remember and have liked zoids as toys. They’re basically robot skeleton animals that you build yourself like easy mechano, given a sort of Transformers-ish narrative to fight in. Hopgood was a natural fit.

****A fellow Starburst contributor and friend of Brosnan’s, mostly known I believe for his writing about TV and film rather than stories. Starburst has a touching tribute to the writer, who passed away in 2013. (Turns out he's Welsh, which I'd not have guessed from the name, but I am very ignorant.)
While I’m at it, here’s a piece about John Brosnan’s funeral, in 2005.
Posted by alexf at 12:19 PM