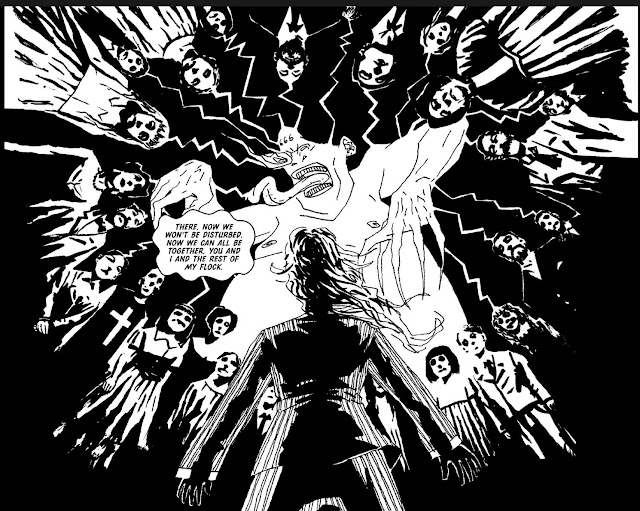 
Caballistics, Inc
The Grievous Journey of Ichabod Azrael (and the dead left in his wake)

Other art credits:
The Ten Seconders
a handful of Terror Tales
-I think he’s also one of the first artists on the countdown who has never drawn an episode of Judge Dredd – or even an incidental picture.

Notable characteristics:
Ink that feels like blood. Portentous use of empty space. Deadpan humour. Deadpan horror. Stylish sound effects. Pages where he uses panel borders to highlight different parts of a scene for dramatic effect, that mimic the readers’ gaze rather than showing progress in time.*

The thing is, Reardon has basically only worked on two series, so it’s very hard to separate the artist and his style from the specific needs of those series. But by gosh he was perfectly suited to both contemporary British horror and period western hellscapes.

On Dom:
Well, here’s an artist who seemingly went from 0-100 in the blink of an eye! Apart from a rogue painted star scan, 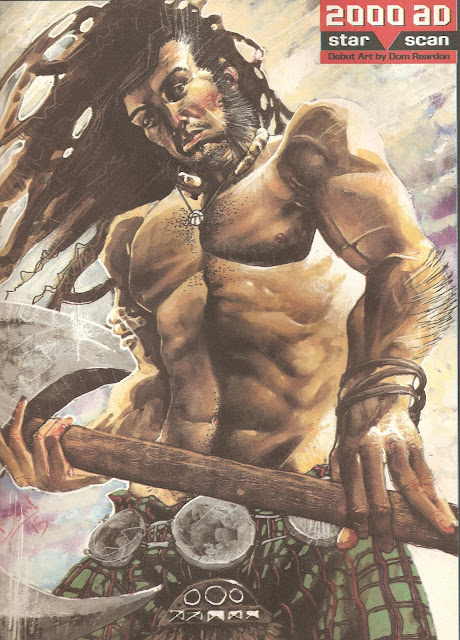 he didn’t trouble Tharg much until a very small string of moody Terror Tales singled him out as the ideal foil for Gordon Rennie’s masterpiece**, Caballistics, Inc. Actual publication dates even suggest there was an overlap between the commissions.

In any event, Reardon’s stark, black and white dread from his first published Terror Tales

were every bit as fully formed as his stark, black and white dread on Cabs

and indeed he maintained a joyfully consistent style across the next few years as the exclusive artist on that epic series.


The art was a huge part of the success of the strip, which needed to be both chilling and humourous, with characters selling the story as much through their expressions and body language as through their dialogue.

There’s a lingering background of sleaze and devilry that massively add to the tone of the piece. But even in 2000AD, you couldn’t show what people like Ravne were actually up to. Rennie no doubt provided careful descriptions of the sorts of things he got up to behind closed doors (and sometimes in front of them), but it’s Reardon who brings that necessary layer of sleaze in what he does show, which sparked all sorts of dark corridors in my imagination.

That's the abrasive but hilarious Hannah Chapter - who has her own woes, of course:

And then there’s the plotlines, which move from haunted tube stations 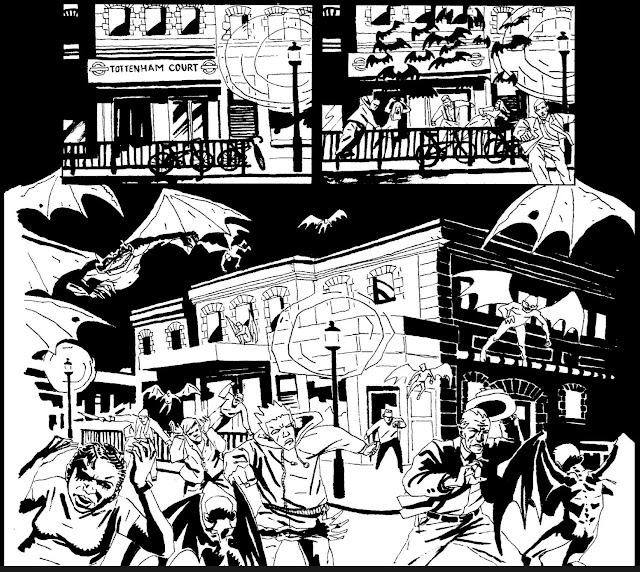 to fairies at the bottom of the garden. 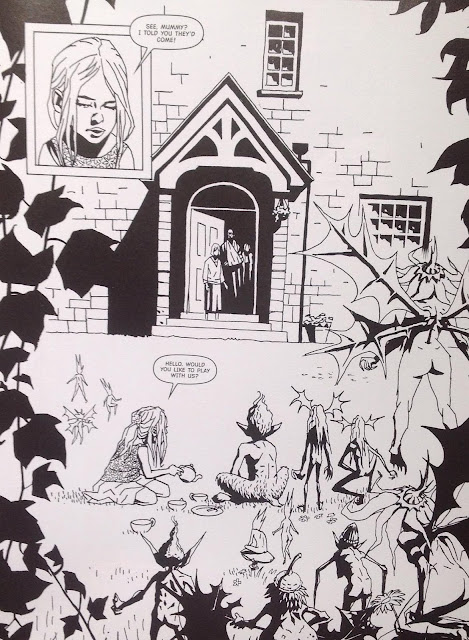 Reardon’s work did get better over the years on the series, but frankly not by much – because it started off so well! There is no more Caballistics, Inc, which is very sad***, but the same story did introduce one Harry Absolam

who we now know and love as Harry Absalom. Reardon sowed the seeds that newcomer Tiernan Trevallion has run with. Not the same style, but very much the same tone, I find.

Moving on, Reardon was trailed as the artist who would take over from Mark Harrison for Book two of the Ten Seconders. A more different style I couldn’t imagine! Harrison is of course the master of the digital form, and he loves to load his panels with details, using bright colours, dark shadows and shiny textures to communicate all sorts. Reardon uses small but thick black lines, and lots of white space. For this job, he chose to move to fully painted, full-colour art, with spectacular results. Sadly also not very many results, presumably finding it just too burdensome a technique. But by gosh, it was gorgeous stuff.

I’m guessing there was no bad blood, as writer Rob Williams (not to mention editor Matt Smith) went to Reardon again for one of the most original new series to hit the prog, the Grevious Journey of Ichabod Azrael (and the dead left in his wake). It’s entirely unlike his Cabs work, while actually using many of the same underlying tricks, such as minimalist backgrounds, and careful posing.

Unlike the sprawling cast of Cabs, Ichabod Azrael is all about its protagonist, who tends to remain pretty stoic and expressionless. He's also kind of scarily ugly, a neat design that Reardon brings to life. He's not meant to be a noble soul, he's kinda grubby and irredeemable. That's a big part of the story, and it's one the art gets involved in through mixing up the styles. Demons are rendered in basic pencils, the protagonists in stark inks, and the secret desires of Ichabod's mind are in crystal clear colours... 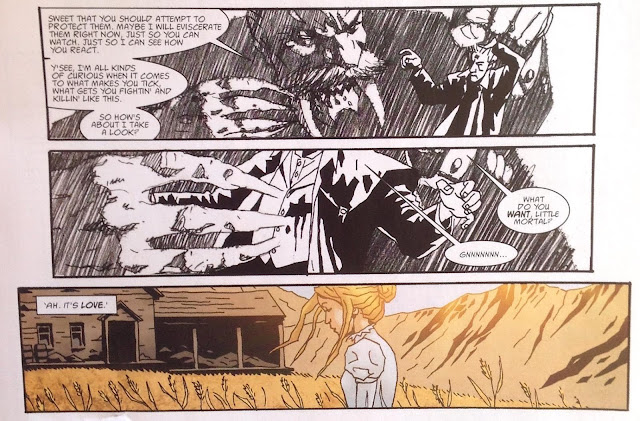 Book 2, you see, was mostly about our 'hero' entering the meta-narrative and coloured-in world of love conquering all. Sort of. For me, Reardon's work on Book 1 feels more confident here than on Cabs, but it was mostly the same kind of stuff used to great effect. Book 2, which was almost entirely in colour, went to another level. Here's our man, not blinking under an avalanche of bloody mayhem. The full colour effect sort of disguises the 'no backgrounds' trick, with the white-but-blue background doing crazy amounts of work. 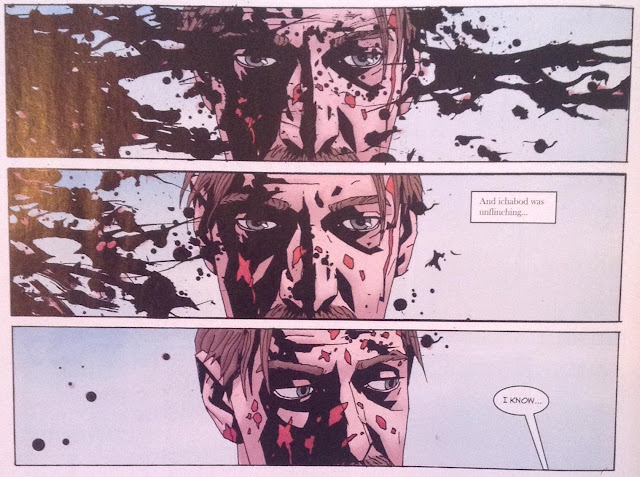 Reardon’s effort with the palette lasted a little longer this time (8 episodes!), but apparently it’s his nemesis, as he had to bow out of completing Book 2 – and hasn’t been back since.

What we’re left with is an amazingly consistent body of work, which happens to be on two of my all-time favourite series (Top 20 for sure). It’s not a coincidence, but it is perhaps reflective of the fact that Reardon’s style is especially well suited to the sorts of things I like, namely creepy horror and violent eschatology. Not many strips combine those themes, but he did have a crack at the cover of one of them, and jolly ripping fun it was too, what…


I guess I'll just have to wait patiently until another series comes along that has need of his particular talents.

More on Dom Reardon
A super old interview on Freaky Trigger
There’s also a dedicated Caballistics, Inc fan page if you fancy that.
And here's a sample of covers he's been doing recently for James Bond

Personal favourites:
Caballistics, Inc
The Grievous Journey of Ichabod Azrael (and the dead left in his wake)
-and the couple of episodes of Ten Seconders he painted were ace, too. 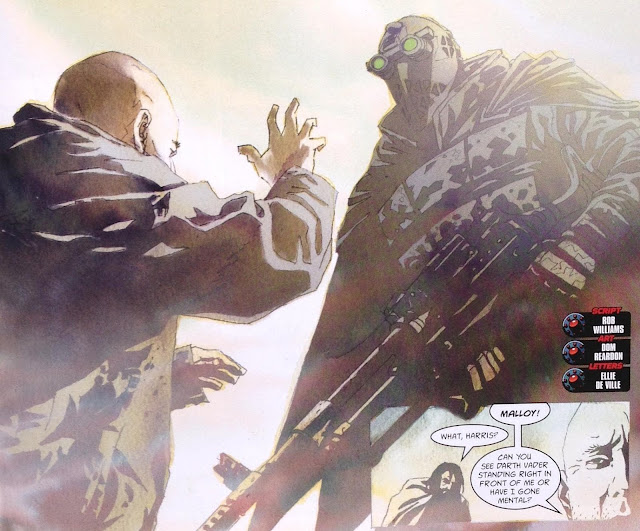 *If nothing else, this kind of pretentious drivel from me may prompt someone to go a read Scott McCloud’s Understanding Comics to find out more about what comics panels can do with time, space and impact.

**To my mind, it’s by far the best work he’s done for Tharg, except perhaps for some of his Dredds

***although, after reading the complete digital collection, it’s actually much more of a closed story than I remembered it being at first.
Posted by alexf at 12:02 AM