Other writing credits:
Judge Dredd
Various one-offs and 3rillers - in fact, Eglington must be one of the few people to have written a Future Shock, a Time Twister, a Terror Tale AND a Past Imperfect.

Notable character creations:
Carcer and Caul, the key players in Outlier
Blunt
The Gunheadz
The Sons of Booth

Notable characteristics:
Although Eglington’s work has been a fairly regular feature of the Prog and Meg for a good 5 years now, and although it covers 2 recurring series, I’ll be damned if I’m able to pinpoint any obvious stylistic tics or thematic concerns beyond ‘he writes the sort of stories and scripts that fit into the 2000AD aesthetic’.

I get the vaguest sense that there’s something of an emphasis on characters who are, not quite outsiders, but people within a system but who feel like outsiders, and yearn to find a place they truly belong. This is of course a pretty major theme in much of the history of literature, but I would say TC does it more often, and perhaps more delicately, than many other 2000AD creators.

Based on his work with Boo Cook and Karl Richardson, I’d also say Eglington comes across as a very generous collaborator, who gets as much from his artists as he gives them.

On TC:
As said, Tom ‘The Egg’ Eglington* is something of a new kid on the block, certainly when it comes to clocking up an impressive and ongoing Progcount! As far as I know he’s done it the hard way – a steady barrage of Future Shock submissions that one assumes got better and better until Tharg said yes, and then showed enough promise in print to get him longer stories and, most prestigious of all, a rotating slot on Judge Dredd.

But what does the reader get from an Eglington story?

Basically, a neat mixture of jolly japes, crazed weirdoes, and fun things for artists to draw - not least some of the old ultravi. With an occasional hint at poignancy.

When Future Shocks aren’t enough to give an idea and a cast of characters some growing room, you need a 3riller. For my money, Eglington’s first try at the format, Gunheadz, is the best we’ve ever had. Talk about your outsiders! Our protagonist is the ultimate comics insider – a comics fan who spends his time hunting down back issues. But he’s kind of an outsider as his big thing is obscure British comics from the 50s, especially the rather childish war mutant strip 'Gunheadz'. Which turns out to be the creation of outsider number 2, reclusive comics creator,

who in turns is revealed not to be a creative genius, but rather the curator of a horrible secret – the mutant characters from his 'story' gunheadz are actually real!

It’s a proper self-contained story, too – the only shame is that means I can’t see how it could return for a longer series, more’s the pity. Such an inventive idea, and the styles used for both the retro comics and the present-day narrative are brilliant.

Meanwhile, Eglington got on with the business of writing dependable one-off Judge Dredd episodes. Rather like his Future Shocks, it’s a mix of crazed weirdoes, nastiness, and a general sense of fun.

One of his first longer stories, Prey, was a bit more of a serious action thriller, and saw him team up with artist Karl Richardson. It's a prime example of Edgington as ideas man - he's got a whacked-out Sci-Fi concept and by Grud he's going to find a way to get it into his stories, building up to the money shot of some crazed monster or other.

Now, to be sure, John Wagner and Alan Grant have written plenty of high octane action Dredds, but it seems to be a genre that many Dredd writers of late have shied away from, preferring to keep the humour front and centre (Eglington not least among them!). So points to him for trying.

This leads into Outlier, Eglington and Richardson’s three-book epic. And it's 100% an ideas story, but you can see Eglington working on character development  - perhaps working on it a bit too hard? Outlier has lots of greatness in it, but it does get a bit muddled up along the way. It started as a murder mystery…

Turned into a character study…

And ended up as a rather imaginative human vs alien interstellar war. With a killer ending.

In particular, it’s about the two leads, Carcer and Caul, and the different connections they have to the alien race that more or less controls both of them. That theme of outsiders again, you see. It’s in the name of the damn strip!

Along the way, Eglington introduced so many characters it was at first hard to keep track. He tried very hard not to just have a hyper-competent hero surrounded by idiots, but in doing so for me erred a little too much on the side of making everyone an asshole. And he overdid the grimacing quotient. Even Caul, Carcer's opposite number, couldn't escape the trouble. On the one hand, he's a super-unusual action comic character, by design kind of a selfish whiny loser, but on the other hand, he was even more of an asshole than everyone else! Overall, it at least allowed for plenty of sardonic banter between pretty much everyone, and Eglignton's very good at that.


Outlier is definitely one of those strips that rewards repeat reading, and indeed reading in chunks. There are plenty of subtle points about identity and loyalty, and that classic Sci-Fi question of the needs of the one vs the needs of the many – only here explored more from a ‘people are all pretty selfish’ view, rather than the more lovey-dovey Star Trek version. As I said, Eglington is a strong ideas man, and Outlier has plenty of grand ideas. 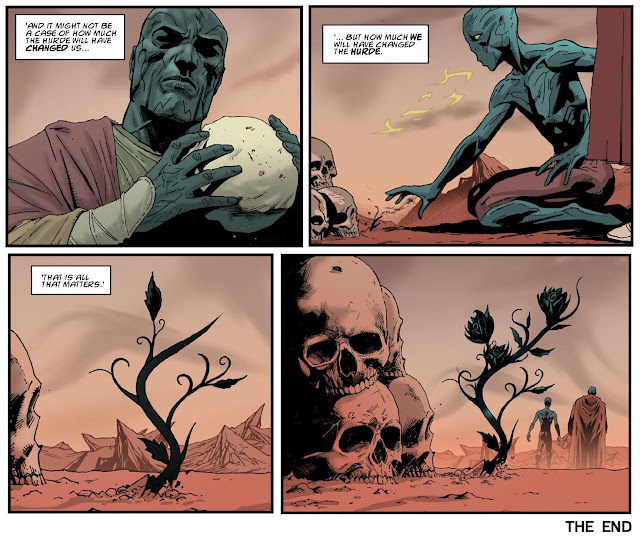 On then to Blunt, another ongoing effort from Eglington (Book 2 has literally just started as I write this!). We have two levels of outsider again here. There’s the titular Blunt, half-human half-apelike Uplift - basically a monster with a heart of gold – or at least a heart of some kind. And there’s our protagonist, teen rebel Ilya (the classic outsider hero), who wants to prove herself within the society of colonists stuck on an alien deathworld.

To Eglington’s credit, the focus of the strip is always on character, and less on the various planetary dangers that lurk around every corner. Still quite plotty and incident-filled, but he manages to make Blunt about the two leads more than about a situation, which keeps it compelling. Mind, it is the situation of the crazy colony-world and the threat of invasion that makes the story be an actual story, and a showcase for Eglington’s fevered imagination. But it's the characters that make me look forward to each new episode. 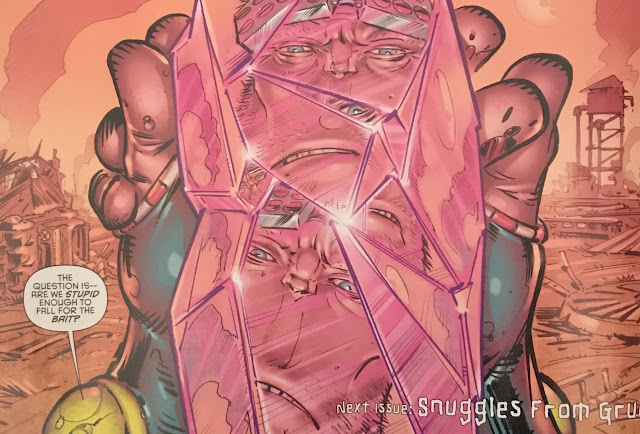 Meanwhile, back in Mega City One, it’s Eglington who has been working the hardest of late to do that thing Dredd does so well – point a finger at political trends in the real world. His ongoing ‘Sons of Booth’ storyline couldn’t be more pointed if it tried – but it also 100% feels part of the ongoing saga of Mega City One dissatisfaction.

Yes, it’s more outsiders who aren’t really outsiders. The disenfranchised white men who are sad about their privilege that is, slowly, being eroded.** If Booth has become, by accident, something of a future version of President Trump, Linus, the villain (and he surely IS a villain) who runs the Booth movement is more of an analogy to the likes of Nick Griffin. Someone just articulate and intelligent enough to mould gullible and angry people to his cause, but without the self-knowledge to realise he’s being a massive idiot. Oh, and of course he's a massive right-wing dick. He's not exactly a racist (although presumably he's an anti-mutant fanatic; any other form of racism in Mega City One doesn't seem to exist, at least not in the text). 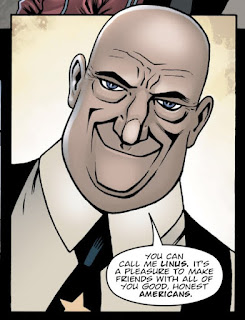 Although, to be fair to him, his plan to get Dredd indirectly involved as the centre of attention is a clever one.

The crazy thing is, Mega City 1 is itself a fascist state (albeit one with some rather tolerant attitudes to personal behaviour). So it's impressive that Eglington finds a villain who is on the one hand harnessing the power of democracy, but on the other hand is an analogy for people today who might perhaps wish the UK (or US) was actually more fascist than it currently is.***

Anyway, into the mix we get a nerd turned terrorist, and a journalist who’s more interested in getting airtime than pursuing truth.

You might enjoy an old Thrillcast episode where TC (along with Rob Williams and Chris Weston) talks about writing Dredd
And you can see him in action on Youtube as part of a Panel at 2017's Thought Bubble festival.

*I've never met the man and have no right to use the nickname, but it's there on his Instagram, damnit.

**Well, that’s my take on it, from the point of view of a white man who still enjoys a heck of a lot of privilege. I’m not trying to say this is some objective truth or nuthin'.

***Neither the US nor the UK are actually fascist states! Although speaking as a namby-pamby liberal, I sure wish both countries would do less locking people up, a lot less personal surveillance, and quit with the racial profiling.