No. 135 Abigail Bulmer and John Charles

Total appearances: 82 and counting
including one cover colour credit...

and an illustration credit on the 2018 Sci-Fi Special

On Abigail:
To be honest I knew I recognised the name when I saw the credit in my daughter's Phoenix, but couldn't place it for a while. She's the artist on Claire: Justice Ninja (she's a ninja of justice). She's also done a bit of art for Rebellion on things like the Cor/Buster Specials ( I think?) and indeed drew the Terror Tale within the 2018 Sci-Fi Special:

but otherwise her work for Tharg has been as a colourist. She's racked up quite the prog count, sneaking past my radar with a name change from Ryder to Bulmer. But, you know, more to the point she's been producing cracking good colours for a bunch of greats, including Staz Johnson, Patrick Goddard and Dan Cornwell.

I'm gonna single out one collaboration in particular. Bulmer has lately been colouring on top of no less a colour-mad artist as Richard Elson, in the last few serieses of Kingdom. Elson's work, going back a long way (like, Shadows), has always been about a very specific colour palette, and it speaks highly of Bulmer that she's made the transition seemless.

My guess is Bulmer's colours will be in heavy demand, and we may yet get some of her pencils in the Prog.

More on Abigail Bulmer:
Here's her website - sadly can;t find any interviews or anything fun like that.

Art credits:
Four one-offs and a bunch of covers
-but the bulk of his work for Tharg has been as a colourist, notably working with Jake Lynch on Dredd, and Steve Yeowell on Sinister Dexter

On John:
John Charles had a brief but respectable career in the early days of the Rebellion take-over, producing a number of covers and one-off strip jobs that bear all the hallmarks of a new droid in the making. 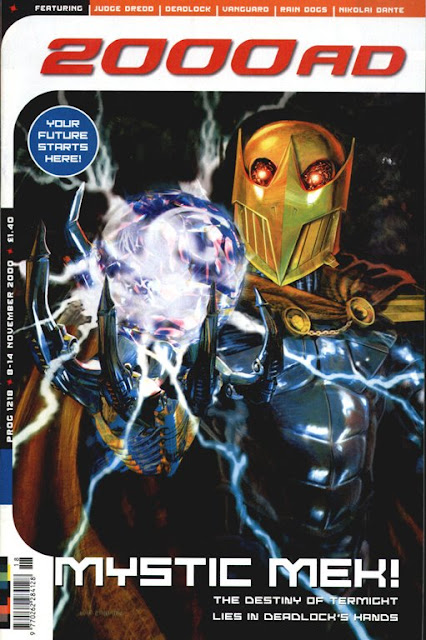 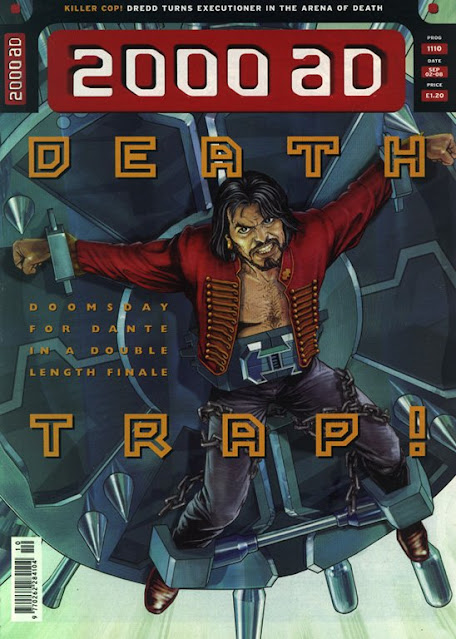 I guess you could say it feels a little young, certainly compared to 2000AD of the era, but it’s good comics. I’m rather partial to this future policeman design from his first published 2000AD strip.

And here he is having fun with giant apes in a more recent story from his 'second stint' as a 2000AD regular:

For whatever reason, that didn’t work out, but then a decade later he came back, and is now a regular fixture on both Prog and Meg as one of Tharg’s go-to colouring droids. As with a lot of colourists he’s typically paired with the same artist, rather than being linked to a specific story, and as such it can be hard to parse what Charles is bringing to the strip vs what the illustrator has laid out for them.

But when one of those illustrators is Steve Yeowell, you’ve got to imagine there’s plenty of room for Charles to bring his own ideas. Clean lines, decent chunks of space to work with. Plus of course there’s the essence of Sinister Dexter to think of. It’s mostly set in Downlode, a city that is meant to be shiny and futuristic – except we’re often visiting the more run-down parts. Charles's colour work tends to be of 'colouring things in more or less as they look in real life' variety, rather than playing too much with mood lighting.

Then there’s the titular ‘heroes’, flamboyant peacocks the pair of them, who don’t mind flashing a whole lot of red to stand out from the greys around them (and to remind the readers of all the blood on their hands). Except when they're relaxing at home.

The world of Dredd is not a million miles from this, as far as the City goes. But this time it’s the citizens who want to stick out, while the Judges stick to the bleak, functional colours of oppression an authority.

Whether Charles will get more strip work remains to be seen. He’s certainly good at it, and his day job as a comics art teacher will surely give him lots to draw on! But for now he's being kept plenty busy as a coloursmith.

Just for fun, why not compare and contrast these two John Charles covers both focussing on good old Finnigan Sinister, from two very different eras of his strip. 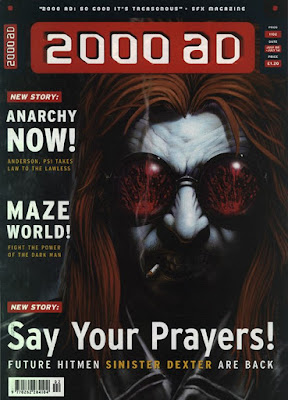 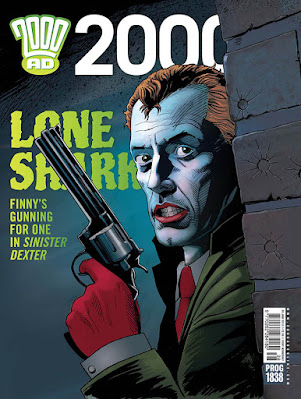 Twitter
A neat interview here
Covers Uncovered  (for an IDW Dredd cover)
And a link to the course at Staffordshire University where Charles has been (and still is?) a lecturer

Couldn't end without noting Charles's involvement in one of 2000AD's more recent bombshells...