Total appearances: 63 and counting
-but not including his work on Psycho Killer for Toxic! comic.*


Notable characteristics:
Fantasy and horror and fantasy horror. No offence to Mr Kendall, who may in fact have great range as an artist, but so far for 2000AD he’s found his niche and is sticking to it! But when you’re this bloody good at that thing, who cares?

He does an especially good line in gaunt faces, oppressive mists and people who don’t quite look they’re alright. (Although these are all such key features of his magnum opus that it’s not really fair to assume these are general characteristics of his work)

On Dave:
So yeah, as mentioned above Kendall’s association with 2000AD presumably began soon after his early work for Pat Mills in Toxic. But I guess he never got a break from Tharg for whatever reason, and I didn’t discover Toxic until the mid-2000s. I first encountered him in that other experimental wonder, the 2005 ‘new talent’ Winter Special. Not well-received at the time, in fact a decent crop of artists (if not writers) did get work in the Prog in due course. Kendall delivered Blade Warrior, a pretty generic fantasy/gore comic that showed him to be a considerable talent with a paintbrush, if perhaps not a master storyteller.

But it had an air of professionalism that marked it above some of the other offerings in that special, and certainly when he appeared soon after on Tales of Telguuth you wouldn’t have marked him out as a ‘new’ artist. So yeah, I imagine that in that long gap after Psycho Killer he was painting and getting paid for it for and indeed improving his skills. If I had stopped to think about it, I might’ve wondered ‘this guy does good fantasy art, with violence. I guess he’s really hoping for a shot on Slaine…’ – but as it happened, the queue of wannabe Slaine artists was too long and too talented! (He did sneak in one cover for that most excellent fanzine, Zarjaz)

And he produced a handful of fine covers for 2000AD, too.

It’s at this point that Kendall gets to have perhaps the single best ‘so how did you get to be an artist for 2000AD?’ story of all time – he had a dream. A nightmare, to be more precise. A nightmare of encountering the Dark Judges on Deadworld, which inspired him to paint some dread pictures and send them to Tharg, who was sufficiently moved to give this relatively untried artist a shot at the bigtime. And boy, did it succeed!

Paired with Kek-W, Kendall has gone on to craft this weird, horrible, tragic, compelling and downright oppressive horror mood piece called The Fall of Deadworld. Four one-off stories turned into a series that has become something of a relentless beast. For a fully-painted series that can, one imagines, only have one conclusion, it returns year on year with more and more episodes.


Kind of the entire point of the series is to watch what happens as Judge Death and his cohort literally murder an entire planet full of people. So far, so bleak. But the genius of it is that such a project would take rather a long time, and in that time there are still-alive people who have their own stories to tell. And there’s a pretty fascinating world to tell those stories in. For a start, we’ve got a planet that is more or less dying. An air of disease and despair washes over everything, not least the plants, animals and insects, the result of some sort of Dark Judge horror. It’s also abundantly clear that the Justice Department, notionally the ruling power of the cities on this world, are beyond the point of being corrupt, and are actively involved in the business of killing.


So you get pockets of people doing what they can to escape from the notice of the Judges, and indeed throwing their lot in with organised criminals, who offer something of an alternative to Justice Dept in terms of keeping order and maintain some sort of functional society.

And then within Justice Dept itself you’ve got politics and manoeuvring and even perhaps a handful of ‘good’ people who are fighting to stay in control of their own minds. And throw into all that some AI and some psychic humans who may or may not be able to escape the reaches of Death’s own psychic attacks, and you can cling to some tiny vestiges of hope that this story isn’t necessarily going to end the same way that we know the original Judge Death’s story ended before he showed up in Mega City One.

Now, in describing all this story-based stuff you might think I’m giving short shrift to Kendall, the artist. But he’s so integral to all those things I just listed you can’t ignore it. He paints the dread despair, he designs the weird (and decidedly not wonderful) characters, he injects those occasional bursts of hope, and he reminds you at all turns that it's not obvious who, is anybody, we readers should be rooting for. Rather than me rambling on, here's the good stuff: artwork scanned from top comics!


And let’s not forget what a stunning job he did/does on the original Four Dark Judges. Fear in particular has never felt so dreadful as under Kendall’s pen.

So yeah, there’s more Deadworld to come, and likely they can spin it out til they get bored. I wonder what 2000AD property he might get to try next...?

More on Dave Kendall:
His website: https://www.rustybaby.com/
A recent episode of the Thrillcast (with Kek-W, too)

I like Deadworld a lot, is what I'm saying. 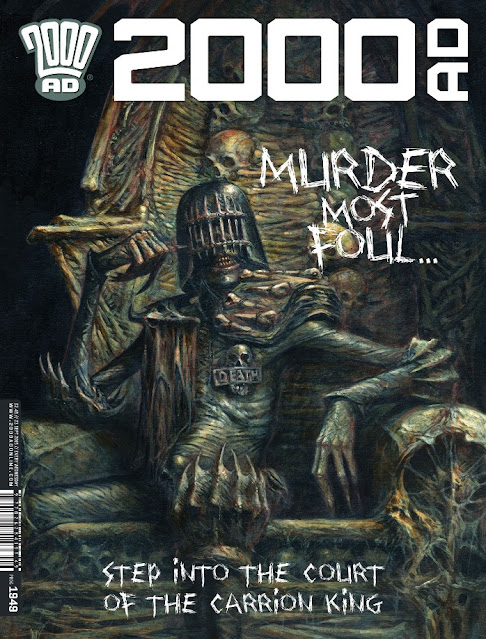 *This days it doesn’t seem quite so odd, but when I first came across the idea of a comic strip featuring a protagonist who kills people and is simply called ‘Psycho Killer’ I thought it was proper hilarious. It’s pretty gnarly, too.

**I'm suddnely struck wdonering if this is a pseudonym along the lines of 'bean counter', as in, a hack writer doing this jonb for the money? Nah, can't be.