Total appearances: 204
-including a total of 65 credits for interior art
-but, for the sake of the numbers, let’s acknowledge a whopping 144 covers drawn across the Progs, Megs, specials, reprints (and I’m not even counting his awesome audio dramas and novels…)

Chief Judge Silver
Pretty sure he designed and drew the first ever Simp, too. You know, the people from Mega City 1 who dress like weird future clowns and sort of predicted the rise of reality TV stars – you know, people who actively wish to be ridiculous for the sake of a little fame, while pretending they are merely being true to their inner selves.

On Cliff:
For an artist generally thought of, I think, as a covers man, it’s interesting to note that Cliff Robinson started out doing interior strips – specifically, Future Shocks – just like everyone else. It simply turned out, relatively early on, that he has a real knack for an iconic single image, especially if it involves Judge Dredd. But, in fact, for the first few years of his long association with 2000 AD, he was as regular on the inside as he was on the outside.*

After those first few Future Shocks, he became part of the rotating pool of Dredd artists, along with a stint on Anderson, Psi Division as she took on the Dark Judges. Now, I don’t think I’m being too controversial here, but I imagine Robinson got that gig partly because he’s something of an adherent of the Brian Bolland school of drawing. He likes it clean and shiny. By coincidence (or perhaps not), he’s also not the fastest artist in the world. Like Bolland before him, he probably always had a Dredd episode on the go, but with a gap between publication and, increasingly, put onto stories that absolutely played to his strengths.

And then, of course, there are the covers. With the amount of care that goes into each line lovingly drawn onto the tiniest crease of fabric, you can forgive Robinson for taking his time. Over the years, the number of covers he put out crept up into double figures, while his interior strip work went down to just the odd Dredd or one-off tale here and there (with one notable exception). Let’s indulge in a little Cliff Robinson cover appreciation gallery, shall we? 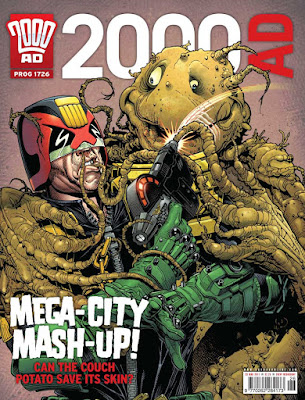 If he's slowed down a bit in recent years, it may be because he;s being kept super busy by fans who commission work from him! I've no idea what they cost but I get the impression Robinson is very obliging. Splendid.
One interesting curio about Robinson is that he’s worked well as both a penciller and an inker. It’s to that common in 2000 AD, but American comics nearly always divide art jobs this way. I think the idea is that pencillers have to have a good imagination, and above all a good way with storytelling – basically, they choose how to show the characters/setting in any given panel, then draw them in with more or less details. Inkers, on the other hand, have to be good at tracing tone, atmosphere, and on a more technical level, they have to be good at applying a line of wet ink onto a clean page of art that can at times be molecule-thin, and keep it neat. It’s f’in hard, that is.

The point is, Robinson can do both. He’s worked as an inker over imaginative storytellers such as Mike Collins, and more recently as a penciller under the blanket of inking workhorse Dylan Teague.

Now let’s talk about Mother Earth. Sad to say, it’s one of my all-time least favourite 2000 AD series, but it’s the only series that featured Robinson as co-creator and full-time artist on. It ran in the late 800s, and was perhaps the last in an annoyingly long line of new series that seemed intent on trying to recreate Judge Dredd.** Mother Earth, the character, was like an eco-Dredd, applying the harshest possible sentencing to people who committed crimes against the planet. For reasons that make no sense, she recruits a trio of idiots to help her. I suppose it made a little sense, because Cliff Robinson had shown on years of Dredd work that he’s excellent at drawing convincing idiots.

Mother Earth then proceeds to wreak poetically suitable justice upon corporate polluters and other scumbags, often with a decent splash of gore (again, playing to Robinson’s strengths). There’s an argument that the series could have worked. Pollution is obviously bad; saving the planet obviously good. Stick an OTT nutter into the mix, and you’ve got a Pat Mills comedy. Sadly the execution wasn’t funny enough, the idiots didn’t add enough relatability, and Mother Earth herself, despite being a genuine badass, was simply too powerful for the concept to make sense. Her goals were clear, but there didn’t seem to be any obstacle to achieving them, given that she could just teleport in and kill whoever she wanted, whenever she wanted.

Ending on a high note, let’s talk about Robinson’s work on Judge Dredd! For a while there, he was picked to produce some pretty important episodes. He varied between the incredibly silly, but crucially memorable stuff such as the Booby Prize, which remains my favourite Dredd vs evil Game Show Host episodes, and then the super in-continuity stuff like the episode where Chief Judge McGruder takes the long walk and is replaced by new Chief Judge Silver. On the silly but memorable side – the simps; on the ‘important’ side – the opening episode of Oz, at the time the first proper Mega-epic in aaaaages. 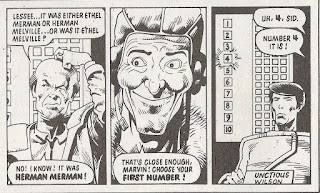 More on Cliff Robinson
The man's own blog, featuring a vast number of private commissions
Obligatory links to Covers Uncovered, here for a solo cover; here for one with Dylan Teague on inks

*It’s all about the numbers and the counting for me.

**I give you… Dead Meat feat. Inspector Raam; Trash featuring Trashman Trask; Cannon Fodder; Calhab Justice feat. Ed MacBrayne;all the roughest, toughest and most noble lawmen in their chosen field.
Posted by alexf at 3:45 AM