Latest Prog: 1858 (and given that his previous was Prog 1204, it’s not impossible he may return again one day)

Total appearances: 137
-including his work for Star Lord, but not for The Eagle, and not including Monster for Scream/Eagle. I hope you have your copy of the collection pre-ordered! (I'd never even heard of this series before, but a combination or Alan Moore, John Wagner and Jesus Redondo is not to be dismissed lightly) 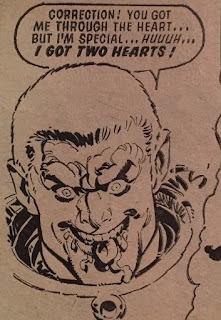 Other art credits:
MACH One
Project Overkill
The Mind of Wolfie Smith
Timequake
Nemesis the Warlock
Rogue Trooper
Missionary Man
A lot of Future Shocks and one-offs, and, most recently, a 3riller
-and the second artist on the countdown who has never drawn Dredd.

Notable character creations:
Amtrak
The Lakam twins from Mind Wars would be notable if the series ever got a reprint (hint hint)

Notable characteristics:
I personally find Redondo’s style is recognisable from some miles off, but I’m struggling to condense it into words at this moment. He’s definitely fond of drawing creases in people’s clothing. His people tend to be beautiful, except when they’re hideously disfigured. He’s big on dramatic poses. It feels like he uses a lot of pen/brush strokes. Often eschews panel borders, without sacrificing clarity reading order (well, not usually), but making it bastard hard to sort out panel-specific scans.

He also likes to do this thing with a smudgy effect that probably has a techincal illustration name but I don;t know it. It's pretty cool, and can convey multiple ideas:

On Jesus:
This isn’t relevant to anything, but seeing his name in the credits box was the first time I knew that people other than Mary’s boy child could be named Jesus. I have since learned it’s pretty common in Latin America (not quite as common as variants on Muhammad are in Muslim communities). Anyway, his art came with high expectations of living up to a big name! It has never let me down.

I suspect Redondo had been working in comics a fair while, as his style has been pretty set across his work for Tharg (and a certain Star Lord; no, not that one). Redondo's first entries into the Prog were on a decent handful of episodes of MACH 1. I wasn't born at the time it came out, but I fondly recall his version of John Probe from reading it as an impressionable 14-year-old*. Something about the way he drew flared trousers, and the general swingin' vibe of Probe as he coolly dispatches foes with generous helpings of violence. Or just stands around in his pants looking sexy.

It'd all be perfectly at home in a Bond movie. A Daniel Craig one, even.

Moving on, Redondo really came to prominence not on 2000AD, but on StarLord's opening strip, Mind Wars. Overally, StarLord's legacy will always be Strontium Dog and Ro-Busters**, but Mind Wars was equally good if you ask me. It was just a different beast – a standalone epic that came to an end within the pages of the comic, so couldn't have transferred to 2000AD even if anyone had wanted it to. It was certinaly streets ahead of two other self-contained 'epics' that ran concurrently in 2000AD: Colony Earth and Death Planet.

Redondo himself was a big part of that. Clearly a seasoned pro, he seemed to have it all worked out, from character design, to spaceship design, to alien worlds and space battles. In classic space opera fashion, physics be damned. There are sharp-banking spaceships, laser beams and explosive engines all over the shop. And somehow, it was all played straight and serious - but it really worked.

Then Redondo immediately proved he could do Earth-bound stories to, being tapped to take over from Ian Gibson on Project Overkill, and then from Gibson again (via series creator Vanyo) on the second big Wolfie Smith serial to run in 2000AD. Overkill provided relatively contemporary action thrills a la M.A.C.H. One. 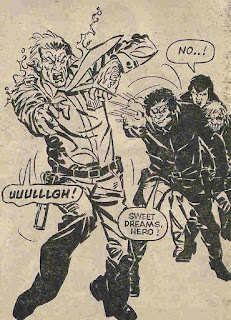 Wolfie Smith was a more varied assignment. I've said it before on this blog, but I do think a trick was missed not further exploring a character who is less and anti-hero, more an anti-villain. I mean, he has the charm and superpowers of a horrible person, but somehow gets caught up in the sort of scrapes that mean he ends up doing good, rather than evil. But Wolfie IS evil. I know because Jesus Redondo showed me.

His time on Wolfie Smith also featured what would become a Redondo mainstay: a character with a hideously deformed face, mangled by fire and/or who knows what else. It's the best of 1980s gooey horror in comic-strip form. The dude would do an epic Freddy Krueger, I'm telling you.

By this time, Redondo was a regular fixture in the Prog, burning brightly for the next few years. Following Wolfie Smith were two more extended runs, first on the epicly epic Return to Armageddon, which is just a ton of fun, and then on Nemesis the Warlock Book II, keeping the story going while series co-creator Kevin O'Neill slaved away on Book III.

But really, in my mind, this is the time when Redondo became king of the Future Shock, the Time Twister, and the one-off. His work one these tales, like contemporary Mike White, was never show-y off-y, but always suited the story. Such stories often don't afford the space to develop characters beyond a basic minimum, but Redondo can deliver the inquisitive professor, the bewildered bystander, the naughty boy who grows up to be Genghis Khan.

And of course that's where the man has been seen most recently, delivering a Terror Tale and a full-colour 3riller, complete with dead men as protagonists. He's lost none of his charm, nor his love of drawing the folds in clothing.

Back to the epics, where characters really do have room to grow. Nemesis Book II is arguably not really Nemesis's story at all – it's about Brother Baruda, the faithful terminator who escapes from an alien PoW camp. He's all muscles and snarls and no compromises. Redondo also does well by Purity Brown, another mainstay of Book II. But his Nemesis himself, sadly, doesn't ever quite capture the gnarliness of the menace of O'Neill's version.

Return to Armageddon is the real deal, of course, the 2000AD story for which Redondo will likely always be most remembered. It's been collected into a proper trade fairly recently, which is about the only evidence I have that plenty of other people (besides me) love this story. It's pretty weird, and by the end is guilty of a certain amount of cliché – but it's the sort of cliché that fits perfectly into the ethos of 2000AD, as a Sci-Fi adventure comic, so I'm not complaining.

But before it gets there, you get a changing cast of characters, including surly space pirates and a sort of benevolent robot who have all stepped right out of Star Wars. Who meet a hideously disfigured man in constant pain, who can't die – something entirely unlike Star Wars, but very 2000ADish. Then a bit of planet hopping, a girl, a demon, and, as promised in the title, some actual apocalyptic armageddon action!

I wonder if today's readership would have the patience to indulge another such epic story, but if they did, I'd love to see Redondo have a crack at it.

More on Jesus Redondo:
His own website (ish)
A recent-ish career-spanning interview on Down the Tubes

Personal favourites:
MACH One (the episodes drawn by Redondo did were generally fab)
Mind Wars
Return to Armageddon
The Mind of Wolfie Smith (for the art specifically)
Shorts: The Time Machine; The Great Infinity Inc. Foul Up; The Pioneer; Sunburn

*Somehow, I managed to amass an entire run of back progs at that time, and so began my first (and so far only) big re-read, a sacred duty to 2000AD fans that may as well count as a version of Hajj – something everyone should do, but only if they have the means to do it. I only had to read 900 Progs when I did it; I'm fairly daunted by the thought of tackling it again for a full 2,000 progs! Especially now that I know how much better a lot of later strips read in the collected editions.

**Strontium Dog was practically perfect form the very beginning; Ro-Busters, not so much. If it hadn't been for the early bits by Pat Mills and Kev O'Neill, I'm not convinced this was an obvious candidate for future greatness.