Notable character creations:
Holt
Harry Kipling
Mowser and the Gunheadz
Blunt (only two episodes in, at time of writing, but he’s a keeper!)

Notable characteristics:
Manic energy. Somehow being very 2000ADish without being at all like any previous artist in particular. Super-vibrant colours, often sort of neonish, except when they’re not. Hallucinogenic. Stupendous amounts of extraneous details dripping off every panel. People leaning back. Grungy long-distance panels coupled with hyper-polished close-ups. Misfits. Something about the face design that makes his work pretty easy to recognise.

On Boo:
Over the last decade, Book Cook has been - and remains - an utterly fresh and distinctive voice crying out in the wilderness. He’s both quintessentially 2000AD, and yet not at all like any other artist. I’ve heard him being compared to Massimo Belardinelli on occasion – always a compliment! – but there’s nothing alike in the way they draw. I think it’s more in what they both draw. Cook, like Belardinelli before him, will reliably deliver panels full of glorious weirdness. He seems to baulk at no suggestion…

‘Create an endless supply of evil vaguely mythologically recognisable Gods’, says Si Spurrier. Done.
‘Populate a space station with aliens, human half-breeds and make them look like downtrodden refugees’, says Rob Williams. Done.
‘Put Judge Anderson inside a virtual reality Eden-like debauched psychedelic paradise’, says Alan Grant. Done.
‘Come up with a brand-new character we can fall in love with after just two episodes’, says editor Matt Smith. Done. (even if, as he confesses on a recent Thrillcast, this actually took a couple of years of behind the scenes tinkering!)

Going back to the beginning, I’m sure I heard Cook telling a story* that he submitted his first samples to Tharg in biro, scrawled on cheap notebook paper. It was only after being accepted that a more seasoned art droid pointed him in the direction of such arcane items as Bristol Boards, brushes and ink.** It suits what can certainly be described as an anarchic style. Cook somehow manages to imbue all sorts of details into his characters and backgrounds, while also leaving them somewhat vague. I also find his artwork to be both attainable (as in, I sometimes think I could maybe draw like that), but also staggeringly impossible (as in, no I bloody well couldn’t).

This seems to hold true for both his linework and his painted stuff (I’m assuming it’s digitally painted, as if that makes a difference).

Another couple of general observations, before we hit some career details.

1. Although he’s a relatively new artist in the grand scheme of 2000AD, Cook has been called on pretty often to produce all-new designs for characters, worlds and what have you.

2. Cook was, for a fair while, the inkman behind Tharg. An honour bestowed on artist who have the very vibe of 2000AD flowing through their pens, surely.

One of his very first jobs was on no less a 2000AD mainstay than ABC Warriors. Storywise and artwise, ‘the Third Planet’ is a curious beast. Cook happens to be one of the best things in it.

But really, he first made his mark with Asylum, especially with his design for protagonist Holt, a human/alien half-breed. The story itself, across two books, was pretty finite, but to my mind that hero could have had a longer 2000AD career; he’s something of a forgotten great if you ask me.

Dead Men Walking, his next series, was more subdued. Perhaps deliberately, he cut out a lot of the detail to focus on the action. Often, here, straddling that strange line between, ‘ooh, I could do that’ and ‘actually., there’s something unique and delightful that I just couldn’t get across’.

And, let’s not forget, delivering another solid action hero design in Jude. Generic, sure, but no less worthwhile for that.

And then his first go at Judge Dredd. I see Cook’s Dredd as a natural follow-on to Brendan McCarthy. Mostly it’s just the widened, slightly triangular helmet shape. But it’s also the dayglo (not, not that one) colour-scheme, which makes MC1 look futuristic in a 1980s kind of way, and that McCarthy all over.

And then veering off in a completely different direction with Harry Kipling (Deceased). I think Cook and Spurrier had in fact only worked on a handful of Future Shocks before this point, but the two seemed a natural fit. This series, in particular, saw both creators pushing hard into the sort of whimsical weirdness that sometimes defines them. Cook got to deliver a number of distinctive character designs, that sort of consciously echo the crew from Ace Trucking Co, only now with an added straight man (who happens to be a woman).

But the series ended up mostly being about the villains – as many god myths as Spurrier could pull out of his encyclopedias, indulging in all manner of mayhem and murder as rendered by Cook in ways that push the tone, but could sometimes be hard to parse. It’s dense stuff, this series, both in story, script and art.

Over in the Megazine, Cook took on the job of tackling a new series look and tone for Anderson, Psi Division. No mean feat, following years and years of Arthur Ranson’s photo-realistic look, and a subsequent classic-comics look by Dave Taylor. Cook somewhat de-aged ol’ Cass Anderson, which one might see as a shame. But on the other hand, he brought a natural irreverence to the tone of the strip, which, to some extent, had been lacking for a long time, despite being one of the key character points for Anderson, as a Judge who is able to cock a much needed snook*** at Justic Dept.

Somewhere along the line, Cook’s work in general seemed to take a massive leap in confidence. Gone were the silhouettes, and the need to swathe panels in huge amounts of detail. Instead, we got this:
a glorious alien world vista from Damnation Station.


His characters, too, took on a new glossy look.


Gunheadz takes it all to a whole new level. You’ve got madcap retro comics coupled with human emotion coupled with the most amazingly gungy mutants. I can’t see see how to bring this set-up back for more, but gosh I sure would like to see them try.


I'll end with a selection of vibrant covers (and try not mention his contender for worst cover of all time...)

Cook has, inevitably, found success beyond 2000AD. Thankfully, he hasn’t strayed too far. Blunt is shaping up to be a real keeper, so I hope that means Cook is here to stay as well. 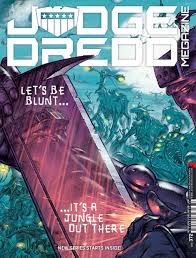 More on Boo Cook:
His own blog
and Tumblr
recent interview on the Thrillcast, mostly about Blunt
and if you love his art, you could do a lot worse than checking out Elephant Men

*Either in a Megazine interview, or in person at a Dreddcon.

**I’m being sarcastic when I say ‘arcane’, because these are the industry standards. But I’m also being serious. As a non-artist, I’ve only ever heard of these things in art interviews, and have no real sense of what they’re like in the flesh, how they work, and whether or not they’d make me a capable artist just by possessing them. I’m guessing not.

***That’s probably not how this turn of phrase works, is it…
Posted by alexf at 8:00 AM