Total appearances: 119
-including a handful of short Terror Tales originally published in Metal Hammer, but available to read on Barney.

Notable characteristics:
The man uses lots of ink, carefully. Sure, that’s a facile definition of a lot of artists, but somehow Irving really forces you to see the decisions he’s made about where to put his ink on the page. Lines everywhere, often not straight. Large patches of dark, mixed with large patches of white. Prioritising mood and emotion over realism. Backgrounds made of textures rather than objects. Bringing fear, sadness and pain to life.
Somehow managing to lace the same sort of imagery with comedy when the script demands it, but not when it doesn’t.

On Frazer:
Frazer Irving burned brightly but all too briefly in the Prog and Meg. He appeared, seemingly out of nowhere, with a super-distinct style that really shook up readers (well me, anyway), reminding us that 2000AD continues to be THE comic to go to for exciting new creators. His style caught on so quick he was as regular a feature as any artist for about four years, first in the Prog, then moving over to the Meg.

Very evidently suited to horror, he graduated pretty quickly from Future Shocks and a single Dredd tale onto horror-themed romp Necronauts. Which isn’t actually a horror story in itself, although it has plenty of horror trappings that Irving ably brings out.

A Love Like Blood, similarly, uses classic tropes from the world of horror (werewolves, vampires and forbidden love), but dresses them up as an action story.

It’s perhaps telling that this full colour strip didn’t hit quite as hard as the black-and-white Necronauts had done. Sure, you need colour to really drive home the red red gore, but overall it lacked the same atmosphere. Or maybe I just have a fondness for cricket bats as weapons. 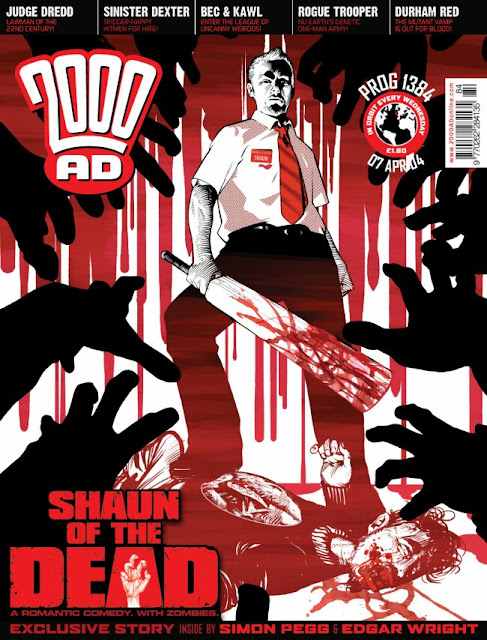 Thick, overbearing black-and-white atmosphere hit in abundance with Judge Death. My Name is Death, in particular, is generally regarded as the first time the character has been played more for horror than laughs since his very first appearance.*

Wilderness Days was back to straight up comedy, really, although Irving’s art means that one is often reminded just how horrifying the character can be.

That trademark creepy atmosphere also hit home in two much-hyped Terror Tales, Reefer Madness and Mars Needs Mates. Both were in colour, but, crucially, limited palettes (one overriding colour with occasional splashes of another) that proved to be exactly right for evoking dread, comedy and a massive dose of irreverence for the source material (both were derived from 1950s B movies that are remembered more for their ludicrousness than for being any good).

Genre-wise, you could say that Irving had a go at a bit of everything in his time with Tharg. It’s comedy more often than not – as shown above and never far from any 2000 AD strip, really - but when it’s not at all funny you get the sombre tone and downright nastiness of Button Man IV, ultra-serious character horror with From Grace, or indeed the way-out weirdness of Storming Heaven.

Storming Heaven, which actually hit the Prog before Irving’s first Judge Death series, showed off the man’s experimental side. It was as if he’d seen the colours on Love Like Blood come across decidedly average, and resolved to try using colours for a different purpose. Once again, it’s about atmosphere.

Storming Heaven is deliriously shiny and vibrant. It’s sort of limited-palette plus, with mostly one set of hues, but then bursts of gold and yellow and all sorts. The whites, especially, stick out.

As with a lot of Irving’s work, there super-expressive emotion on show everywhere. Often this is in the form of either extreme sadism or extreme terror/despair. A mood that works better on some stories than others, if I’m honest. Yes to straight up fun like Necronauts or straight up horror like From Grace, not so much to things that get caught in between. But always unique, and it’s a style I am massively partial too. And it’s good to be experimental.

I would argue that Irving’s final series for Tharg, Button Man IV, saw the artist perhaps reining himself in a bit, no doubt out of respect for series creator Arthur Ranson. Their style couldn’t be more different, but Irving’s work is a bit straighter, moodier rather than outright gaudy with atmosphere, and painted colours that are a little more real. There’s still plenty of trademark sadism and terror, as you would expect from Button Man.

So far, I’ve not mentioned the man’s signature series, the one that will likely be remembered and revived the longest – The Simping Detective. And certainly it his I think his most accomplished work, hitting a fantastic mix of comedy, weirdness, atmosphere, character and experimentation. Although if I’m honest I’m more likely to turn to his really early work to get that fondly-remembered hit of ‘gosh, this is bloody good isn’t it’.

It’s also when his work actively got more three-dimensional. Something about his inking/painting that fleshes out his characters more. Technically this series began as a one-off story for ‘Mega City Noir’, so of course it’s all wrapped up in 1940s/50s Hollywood detective style. Which is to say, lots of black and white, lots of venetian blinds, femmes fatales and the feeling that everything is soaked in bourbon (not least our hero).

It’s a right treat, although I would say that Spurrier’s authorial voice comes on so strong that of all Irving’s work it’s the one I least notice his hand in, even though his style is as potent as ever. Of course, in comics part of the trick is not to be noticed, and just to let the story play out in front of the reader’s eyes.

I imagine in the years since he’s moved on, Irving’s style has developed in ten different directions – I’d love to see him in the Prog again showing us what he’s learned. 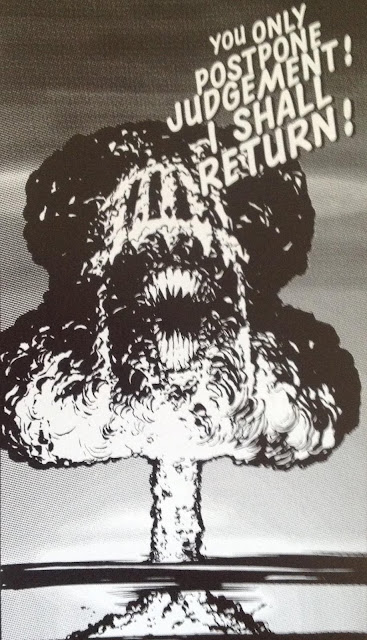 More on Frazer Irving:
His own Tumblr
A super-old interviewwith no less than Al Ewing
Covers uncovered, of course

*You could argue that Bolland’s relatively serious art keeps ‘Judge Death Lives’ in horror territory; Necropolis too isn’t exactly funny, but it’s much more of an action story than it is a horror one, especially the Death/Fear/Fire/Mortis bits.
Posted by alexf at 3:28 AM