Total appearances: 81
-including his run on Tank Girl in the Megazine.

Notable character creations:
Dan Francisco
Libra (or whatever the correct name is for the Counterfeit Girl…)

Notable characteristics:
Well, the man wears his influences on his sleeve, quite literally.* He’s something of a 2000AD superfan, or at least, a superfan of 2000AD art and artists, which isn’t that uncommon in creators who started working for the Prog at any point after the early 80s, but not many have curated exhibitions of the stuff!

In terms of Dayglo’s published styles, it’s Mick McMahon and Brett Ewins that shine through as his favourites. I mean, I thought I liked Ewins’ art, but my love’s got nothing on Rufus Dayglo. It is utterly appropriate, but also deeply sad, that he drew the official 2000AD memorial tribute.

But Dayglo has his own thing going, too. Pop Art. Going big. In your face.

Attitude. Chunkiness. Embracing the artistic worth of empty space.

On Rufus:
Now, Pop Art is something of a dirty word** in the world of comics, since it originally applied to so-called fine artists who appropriated comics panels, either copied or redrew or them, or used them in collages, and presented them to a ‘refined’ world of art lovers who didn’t read comics and thought of them as trash. But, for all that, the likes of Roy Lichtenstein in particular added a hint of style that emphasised the heightened, fake reality of most comics, most obviously by drawing out the little coloured dots that were, once upon a time, the way that comics were printed. And, speaking for myself, I encountered this art at an age far too young to know or understand the troubling backstory, and loved it from the word go.

So, it’s with great admiration when I say that I find Dayglo’s art (on some stories more than others), has something of that style about it. He’s not afraid of his comics looking like comics, and of his characters looking like people who live in a world of comics, rather than in the real world.

And boy howdy, is this ever my kind of thing!

As with so many artists on this tribute blog, Dayglo’s work has markedly improved over time. I think the first time I noticed his name in the credits box was on the experimental 2005 Winter Special, in which Tharg made a point of commissioning relatively untried writers and artists. Here’s a sample of Dayglo’s work on the story Earth War.

So it reminds me a lot of VCs / Judge Child era Mick McMahon. AKA big ‘effin boots to fill! If it doesn’t quite have McMahon’s impeccable layout skills, it does, I think, capture his no-holds barred attitude putting emotions and weirdness front and centre, not trying to hide anything.

In fact, Daylgo had illustrated a Future Shock a couple of years earlier, very much the work of an artist in training, but with that bold body-language already in place: 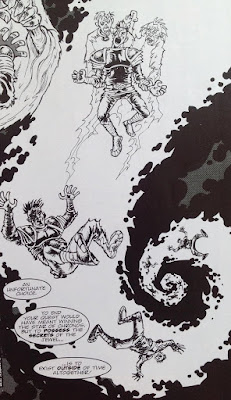 More McMahoniness followed this in Whatever happened to Giant, in which the original John ‘Giant’ Clay meets Judge Giant (Jr), a poignant tale set largely in a care home.***

Dayglo’s first Dredd story came not long after, and it’s a cracker, introducing no less a major character than Dan Francisco. There’s still a McMahon thing going on (and why not, if you’re tackling Judge Dredd), with maybe a hint of Cam Kennedy creeping in (again, why wouldn’t you). But, more than those influences, there’s that big, bold attitude again. The one that says, ‘yes, I will draw a MASSIVE eagle badge with a 9-letter name on it’, and that isn’t afraid to have its hero bleeding out in the foreground of a giant panel.

For his first longer run, Dayglo tackled one of the serious, Aimee Nixon focussed episodes of Low Life, the Megazine story War without Bloodshed. I relished the opportunity to wax enthusiastic about it with Eamonn Clarke on his glorious podcast, but it’s worth repeating: this story is awesome! And it’s THE vital link in the chain that gets us from the Aimee Nixon of the first Low Life strip to the Aimee Nixon of Titan.

Having got well into the good graces of 2000AD fans, Dayglo accepted the gig of drawing all new episodes of Tank Girl for the Megazine. 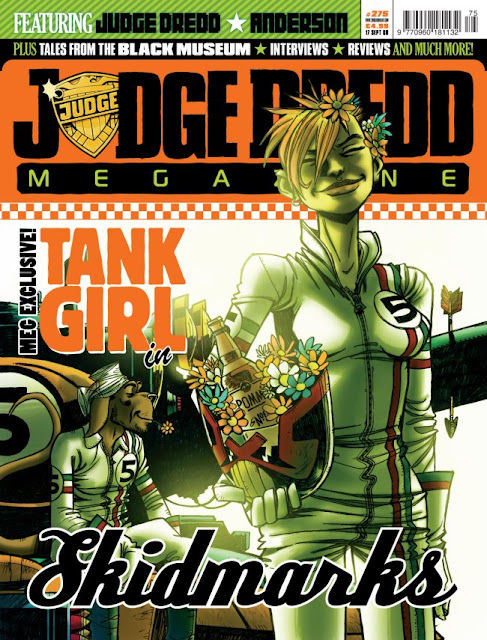 He brought with him an all-new style – multiple styles, indeed, to match the series. It’s not so much Jamie Hewlett, more classic Beano/Dandy art but tailored for adult readers. And the art is, on the whole, very good. The stories, sadly, were not. I liked the one that showed Tank Girl’s school days (which look back not just to the Beano, but also to Ronald Searle's St Trinian's cartoons and Molesworth books),

– but frankly, the humour wasn’t even slightly of the Wagner/Grant school that we’ve perhaps got a bit too used to. OK, that's not entirely fair - this exchange between Booga and a psychiatrist is epic:

Readers (or at least, a small but vocal group of online commentator readers) did not care for it (to put it mildly), and, for a time, meant that Dayglo was somewhat soured on all things 2000AD. I can’t imagine a feeling much more heartbreaking than having fans who share the same passion as you hating on a project you’ve spent months (years?) of your life on.****

It would be five long years before Daylgo returned to the Prog, with a glorious in-your-face cover, and not for the most obvious of stories…

…and then, the unexpected return of those old future war favourites, Bad Company. No Brett Ewins to draw it, so Dayglo took on his friend and mentor's role as penciller, with original inker Jim McCarthy adding the classic Bad Company touches.

As much as anything, First Casualties was a love letter from Milligan and especially Dayglo to their old pal Brett Ewins. And as such it’s a roaring success. There have been some (valid) complaints that the storyline here does not seem to line up at all with the events of previous books of Bad Company. But for some reason, this hasn’t bothered me. The creators managed to recapture that essence of lunacy combined with the politics and emotional cost of war that feels like Bad Company used to feel. Sure, the plot isn’t as compelling as the original, glorious run, but it’s a treat in its own right.

Terrorists, while once again not tying up the plot part, hews even more to the feel of the old days, partly thanks to Dayglo’s art now being splashed with the most insanely vivid colours courtesy of Dom Regan. Plus, Mac’s back! I love Mac. But it's also much more Dayglo's own thing, following Ewins's original designs but not his drawing style. Dayglo's slightly looser, almost plasticine body textures getting their due.

I’m hoping the revived Bad Company has proved popular enough, twice now, to merit further adventures of the Old Soldiers, but you know what I really want from Dayglo? More Counterfeit Girl.

As expressed by Tharg, this series, which debuted in the almighty Prog 2000, was designed to showcase 2000AD’s commitment to new stories, as well as old favourites. For his part, Dayglo had quite the task to achieve, creating a future Britain that had familiar trappings but was also gonzo weird, and also dreaming up Libra, a character that we know we can’t trust, but also that we have to feel sympathy for. And, more than that, Dayglo had to make her get more and more ill with each passing episode, a narrative trick that could stand to be used more often in comics, it’s quite a nifty visual. (With a special mention again for colourist Dom Regan, going bold with his choices to match Dayglo's ever-bold layouts)

This is the part where I usually talk a little about what a story is actually about, and how the art builds on that. The task might be beyond me. I mena, clearly the overt text is about identity theft down to the genetic code, married to Sci-Fi staples of ‘mind-as-information’, and ‘identity as data construct in an uncaring bureaucratic world. And I guess there’s a bit of subtext about teenagers struggling to develop their own identities, in part through running away from loved ones and in part through copying other people.

But I don’t know that I really understood everything that was going on. I just know that it looked damn cool!

And I could do with more – g’wan Tharg.

*Rufus Dayglo has more 2000AD tattoos than you.

**Two words. You know what I mean.

****For my money, the major sin of this Tank Girl run was that it went on too long – if it had had like 5 separate 3-4 month stints it might’ve gone down a lot better. That said, it just wasn’t weird or funny enough, and I can’t put my finger on why.
Posted by alexf at 2:31 PM