Notable character creations:
See, I really want to list the two female leads of Rain Dogs as ‘notable’, but I can’t remember their names…
On a technicality, Wilson was also the first to draw the Traitor General – although he’s in disguise in that story, or rather, he’s not wearing his classic ‘burned-up villain’ face quite yet.

On Colin:
Colin Wilson burst onto the scene as one of the first wave of new artists helping to fill gaps left by 2000AD’s ‘original artists’ (for want of a better term), who were either slowing down or being given more and more work by American competitors. Specifically, began working on Dredd just as Mike McMahon and Brian Bolland were doing their final episodes (for a long while, anyway),

and then took the baton from Dave Gibbons on Rogue Trooper.

Of course, this tactic didn’t work out too well for Tharg, as Wilson himself moved out of British comics all too rapidly** (he was a bit good, after all), after being a steady fixture for a mere hundred Progs. And that was the end of that – until incoming Tharg Andy Diggle headhunted him to come back to the Prog twenty years later, for a much longer stint.***

Anyway, let’s take a look at ’s early work on a Future Shock...

...before moving to the main event, his explosive pencils on Judge Dredd .

Shockingly good, right? But the main things for me is that it added a layer of urban grit to Mega City One that hadn’t quite been there before, in the whacked-out future look from the really early Ezquerra images, to McMahon’s hyper-stylized architecture. I suppose you could argue that ’s MC1 is almost too close to real city structures from the present day – a little more movie Dredd than comics Dredd. But in the context of the rather old-fashioned Mega Rackets cycle, that actually fit pretty well.

’s people are great too. There’s the down-at-heel look of the man visiting the body sharks, contrasted with the intense craziness of the ‘mad citizen’ who just can’t take it any more.

But even more than on Dredd, Rogue Trooper is where really made his mark. Dave Gibbons did so much to create the world and setting of Rogue Trooper, but most of his stories took place out on the open wild of Nu Earth. had the chance to put Rogue in different contexts, including military HQs, satellites, and on tour of battlefronts.

Rogue proved too popular a strip to allow any one artist to do the job, so rotated with a solid team including cam Kennedy and Mike Dorey, but he felt like the series’ main artist after Gibbons left.

Specifically, tackling what you might call the ‘myth-arc’**** of Rogue Trooper, where he almost catches up with the Traitor General (Marauders being the best of that sequence), or the long-form rollercoaster of All Hell on the Dix-1 Front (although he didn’t quite manage all 12 episodes himself), an action romp that feels as if it's telling part of the wider story of the Nort-Souther war, complete with an untrustworthy female lead. 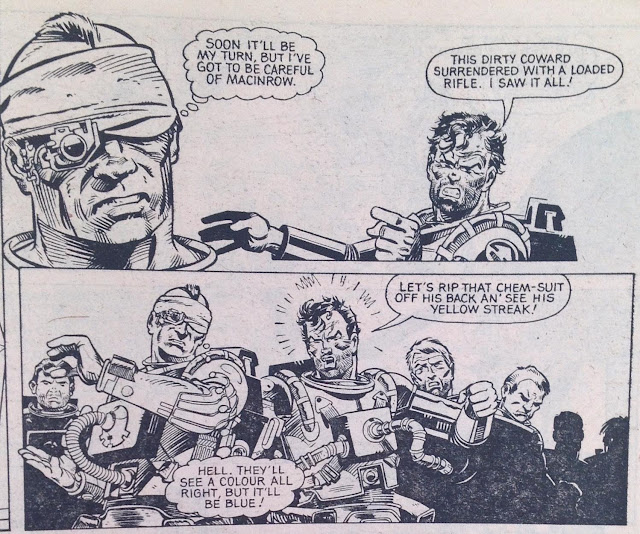 But it was not to last! I don’t know what happened, but I can only assume that found more profitable work at that point, and may never have been seen in these parts again…

…if it weren’t for incoming assistant editor Andy Diggle, some 15 or so years later, who set about finding this lost favourite, and putting him to work as much as he could, on Dredd, on one-off delights, on the latest version of Rogue, and even on his own all-new series, Rain Dogs.

Also, some Pulp Sci-Fi, back when Tharg was trying that thing of doing Future Shocks that weren’t required to be defined by their twist endings. I suppose the major selling point of the series was to have super SF-y Science Fiction, as in proper futuristic spaceships and such. As someone with a gift for environments and hardware, Colin Wilson was a good fit, although I have to say it struck me that leaning too much on this end of his work revealed that he’s actually much better as selling emotions with his people, even if he uses their environments to help communicate said emotions.

Phase 2 Colin Wilson has to deal with colour, at a time when digital colouring was the way to go, but at a moment in time when it hadn’t quite got really good yet.

Perhaps as a result of this, Wilson’s return to Judge Dredd didn’t have quite the same impact as those earlier efforts. The grimaces are all present and correct, but the backgrounds don’t have the same lived-in feel. Maybe it’s just that the Mega City One of this era was a shinier place, or that these stories were more about the upmarket ends of town, as opposed to the seedy parts where one might go to find an organ legger.

Wilson, deservedly, had a key slot in the major epic of the era, Doomsday. There’s some robot rampage action,

but, more importantly, there’s some political machinations involving Volt, Herhsey and the ever unpleasant Jura Edgar.

Rain Dogs makes the best of a slightly washed out look, suggesting a world that is faded compared to our own. I really want Rain Dogs to be better than it is, but there’s not quite enough going on. The characters are fine, the setting is excellent, and the art sufficiently moody, but it’s all a little too by the numbers grim action movie stuff, down to the perma-scowls.

Tor Cyan was a definite step up in ‘nu-Wilson’ terms – perhaps he has some strange affinity for war-torn alien planets, and burnt-out super soldiers?

Fittingly, Wilson’s last outing for the Prog was a) written by Andy Diggle, and b) a return to the world of classic Rogue Trooper, I imagine still the strip the artist is most strongly associated with in the minds of readers (even if, technically, he drew more episodes of Dredd overall. Just.)

This was some three years after he’d been a regular feature of the Prog and Meg, a little hit of nostalgia called What if Gunnar had survived the Quartz Zone Massacre? – basically, a one-off showing what early Rogue Trooper strips might’ve been like if the leads character had been a trigger-happy psycho. Wilson plays ball, combining his newer way of drawing faces with his classic black and white super detailed costume work.

More on Colin Wilson:
There’s an interview from 2015 with Alex Fitch on Panel Borders
And a neat career overview (well, up to c.2001) from Ozcomics.com
Sadly his own website seems to be down at the moment, but it may go live again one day?

*I’ve actually forgotten what the link is between Cyan, Rogue and Friday. But there definitely IS one!

**Not on American comics, though, but into the altogether classier field of European albums.

***Of course, Diggle promptly brought Wilson with him to the US when he left to write for Vertigo. See also Jock.