Total appearances: 79
-not including Sex Warrior for Toxic!, hilarious though it is.

Notable character creations:
Max Brewster
Fr1day
Armon Gill
The Spider Woman
and, although not a character, he did create the design of the 'Banana City' Judge look.

On Will:
For a little while there, as the 80s turned into the 90s, Will Simpson was a proper mainstay of 2000AD. He got to do a number of key stories for Judge Dredd, developed a couple of major new series (Universal Soldier and the reboot of Rogue Trooper), and helped out on some other strips when the ‘main’ artist was busy (Anderson, Tyranny Rex).

Very unfairly, he’s also a forgotten legend of fully painted art. At the time, Tharg certainly crowed about Simpson’s stellar work on the likes of Rogue Trooper: The War Machine, but frankly since those days people who talk of such things always point to Simon Bisley and the Horned God as the birth of fully painted weekly comics, rather overlooking the work Simpson had already been putting in first on Judge Dredd, and then, contemporary to Bisley’s Slaine, on Rogue Trooper.

Not that Simpson had a rough time of it. For whatever reason – I believe Vertigo had something to do with it – he moved on from 2000AD pretty quickly after finishing that first (and best) Friday outing, only coming back several years down the line to do a bit of Dredd and to make his mark on a major new series, Witch World.**

Anyway, we’ll get back these glories later. Because he didn’t start out a legend, indeed, one of the best things about this kind of career trajectory is that we readers got to see Simpson develop from a proper novice:

to a dependable regular:

to one of the best painted artists ever:

and, eventually, to a long-standing professional with a unique style:

After some early Future Shocks and an fill-in, Simpson really got to strut his stuff on Universal Soldier. The grit is what shines through to me. It’s so delightfully reminiscent of low-budget 80s action / Sci-Fi video aesthetic. But the good ones, with a charismatic leading actor and a script that was slightly more intelligent than it needed to be.

The premise is that Max Brewster has been operated on…

…so that his brain is somehow psi-linked to warriors from across human history. In times of danger, he ‘timeslips’, meaning that his brain merges with the brain of one of those warriors, allowing him to pick the perfect fighting style (and witty banter) to match any occasion.

He got his first Dredd work shortly after, as part of the massive team of artists on the Oz epic. I think he got the second-most episodes after Brendan McCarthy. Memorably, he did the ‘mad ship robot Cookie’ sequence, where Chopper encounters a murderous droid while at sea. Deliciously loopy, especially for the part where Chopper realises what’s actually in ‘Bosun’s broth’.

After Oz, Simpson essentially graduated into one of the chief Dredd architects, handling some of the more prestige episodes.


Bloodline was especially memorable to me because it was, kind of, the first time there’d been lush fully-painted artwork on the interior of the comic.**** It was only for the colour centre spread, but by gosh did it have an impact on me. In all honesty, the first time I saw it this style was actually a bit of a turn off. I was reading my big brother’s old Progs, that I hadn’t dared touch before, and had come off the high of Oz – basically an exciting sports story to my 10-year-old eyes, and then I got this:

It was just well grown up – too much for my young eyes, and very much a herald of things to come, 2000AD was definitely not a comic ‘just’ for 8-12 year-olds any more. As I read further Progs, I came to Simpson’s pair of Spider-Woman tales, which were proper body horror in the vein of Cronenberg’s ‘the Fly’, a film I had just recently seen and loved. The Wagner/Simpson version was and is bloody horrible, but also charming and very moving, and I love every page.

Talking of body horror, how do you categorise Tyranny Rex in Soft Bodies? I’m sure I’ve noted before that it’s one of 2000AD’s all-time least-coherent stories, but in a way that feels deliberate. Tyranny herself doesn’t entirely know what’s going on, and I think that’s meant to be part of the point of the reality warping world of Indigo Prime – for indeed, this turned out to be a sort of warm up for that strip.

Back in the world of Dredd, Simpson was also the key artist to tackle the idea of our hero aging. It’s the stubbly chin that sells it for me.

It’s kind of funny now to look back on 1991 and think ‘ooh, Dredd’s 15 years older than he was in 1977, he must be getting on a bit, wonder how that’s gonna affect his way of thinking and his ability to do all the stunts’. I guess if Wagner had known quite how many more decades Dredd was going to be around for, he wouldn’t have started on this beat! Nonetheless, a whole lot of the Necropolis extended saga was about that very thing, and Simpson’s work on the prologues put it foremost in our minds.

Time now to step into the world of Rogue Trooper. But before we get to the big man himself, one can’t ignore this slice of classic early 90s pretentiousness…

From a Sci-Fi Special story featuring Venus Bluegenes, a character everyone knew was cool but no one had really worked out what to do with – ironically, she mostly came into her own only after teaming up with Fr1day many years later.
Outside of Dredd, Simpson is surely best remembered for rebooting Rogue Trooper, as written by original series artist / co-creator Dave Gibbons. It’s a perfect match of style and tone, and, yes, it’s also more pretentiousness. Nothing really pretentious in the way Simpson depicts his soldiers, and especially the mud and blood-scarred landscape they fight in. It’s very much the comics equivalent of those late 80s, ultra-bloody Vietnam movies (Platoon, Full Metal Jacket, Hamburger Hill). The art speaks for itself, really…

Of course, painting that much detail takes its toll, and The War Machine was another victim of erratic scheduling, printed in bursts of 4 or 5 parts across a year. But worth it! And, as that story has been collected several times since, one suspects many readers think it was well worth it, too. Indeed, Tharg of 1991 thought it was such a big deal he commissioned a whole Rogue Trooper annual, and an ongoing series based on the new hero, Fr1day. Sadly with neither Gibbons nor Simpson carrying on, it wasn't what you would call a big hit. 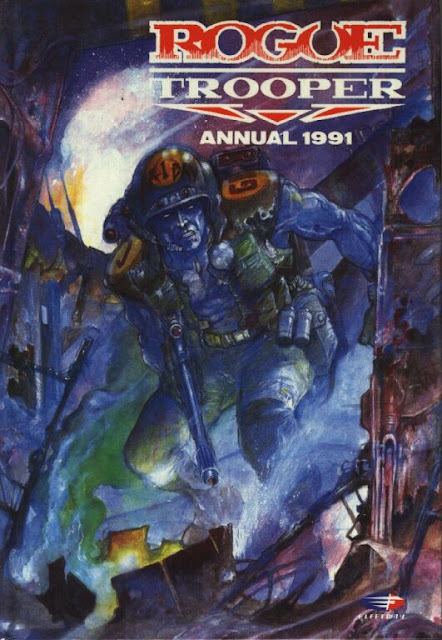 After one final hit on Dredd for the Megazine,

…until he was, quite without warning, back again but with a very different style – perhaps one honed on various American comics that presumably demanded he find a much faster way to produce many more pages than 2000AD needed. Still colour, still painted, but very much looser and more comics-ish. All in the service of Witch World, a sword ‘n sorcery saga that decided to take itself very seriously (and credit to it for that, at a time when the rest of the world was desperately trying to be arch and knowingly funny). Simpson’s art, accordingly, is pretty sober. There’s room for some gore in there, but basically he’s got a plucky heroine and an aged knight trapped in a weird alchemy lab dungeon thing. He only did the one storyline, as the series itself never made it beyond an initial airing.

To date, Simpson’s last hurrah for Tharg was some years later, on The Chief Judge’s Man. This was the first part of a continuing storyline around a top secret Judge assassin, and of course a foil for Judge Dredd. Armand Gill is a troubled man with a hint of crazy, that little something that Simpson knows how to embed in his characters.

Since then, I believe he’s been in the world of Film/TV design work. Of all the strips in his 2000AD career to draw from, crazily enough Witch World is probably the most similar to his latest and highest profile job – Game of Thrones.

More on Will Simpson:
There's a neat biography on IrishComicsWikia (he's from N'orn Ireland don'tcha know)
-but otherwise I got nothing, unless you wanna see some Game of Thrones concept art

*As a reboot of Rogue Trooper, Fr1day isn’t exactly a new creation; indeed, Dave Gibbons had drawn his own redesigned version. But frankly, Simpson’s vision of the character and especially of the new Nu Earth felt like a whole new ballgame.

**Yeah, that one didn’t work out so well. But at the time, it was billed as being like the new Slaine or something.

****I’ve no knowledge of how the colour pages were being put together at this point, but I think Simpson’s were the first that obviously looked like painterly watercolours. There may have been similar / previous published work in a Special by someone else, mind.